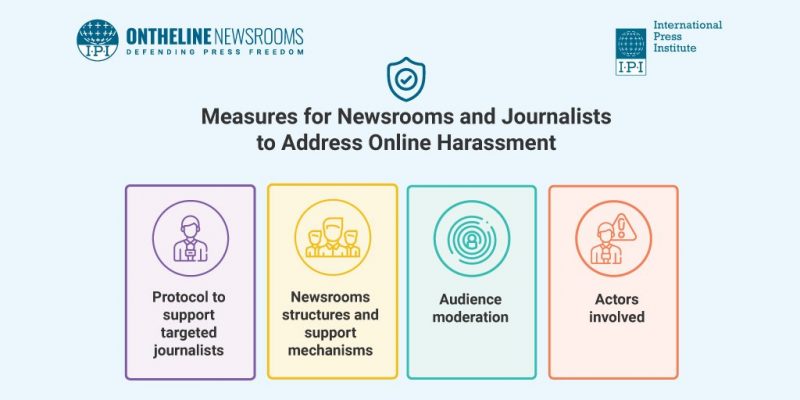 
The International Press Institute (IPI) launched a new platform on 9 July called Ontheline Newsrooms providing best practices to counter online harassment against journalists. The platform was designed for newsrooms and journalists in four principal areas: moderation for both on-site comments and social media posts; newsroom structures and mechanisms designed to promote a culture of safety around online abuse; protocols for assessing and responding to attacks; and the roles and responsibilities of newsroom actors involved in these areas.

The data were collected through interviews with over 110 editors, journalists and media experts as well as visits to 45 leading newsrooms across Finland, Germany, Poland, Spain and UK – including the BBC, The Guardian, Reuters, German public broadcaster ARD and El País. The results were published in a report titled “Newsroom Best Practices for Adressing Online Violence against Journalists” on 3 June.

Female journalists on the front line

The report found that female journalists are more likely to receive online – vicious and often highly sexualised – abuse than their male colleagues.” While men are more likely to be criticized, insulted and threatened for their professional output, attacks on woman mostly focus on the person herself and her physical traits,” the report says.

Across all five countries, the study analyses several forms of harassment, such as belittlement, sexist insults, explicit and veiled threats of sexual violence, as well as the different topics likely to trigger online attacks and the powerful role of supporting peers.

Most newsrooms do not have sufficient resources to dedicate to a proper strategy of prevention and protection, yet the research highlights the good practices currently in place in newsrooms and provides detailed recommendations for media outlets and editors, journalists and States.

The research was conducted by Barbara Trionfi and Javier Luque with data collected beween April and December 2018. It is based on interviews with editors, heads of audience, social media editors and journalists. Furthermore it included interviews with media experts from civil society and academia, as well as eight focus groups with female journalists and freelancers.