The EFJ will join the global climate strike this Friday 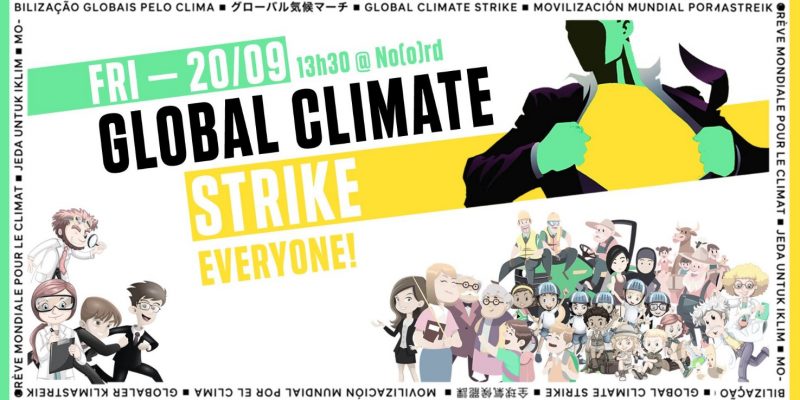 
The European Federation of Journalists (EFJ) will join the global climate strike this Friday in Brussels to put pressure on world leaders to deliver urgent solutions to the worsening climate crisis.

Demonstrations will take place around the world between September 20 and 27 to coincide with the United Nation’s climate summit in New York, where heads of governments must take concrete action to deliver on the promises of the Paris Agreement. That includes the commitment to a “just transition” – moving to a carbon neutral economy in a way that’s fair to people working in industries that will be required to change.

Together with the European Trade Union Confederation (ETUC), the EFJ will actively participate in the mobilisation taking place in Brussels on September 20 in order to press for this just transition to a green future. It follows on from the EFJ’s support for the massive Youth for Climate protest staged in March.

ETUC General Secretary Luca Visentini, who will also join the protest in Brussels, said: “There’s no jobs on a dead planet, which is why trade unions will mobilise for climate action and a just transition alongside youth activists like Greta Thunberg to ensure that world leaders deliver on the promises they made in the Paris Climate Agreement. Climate action and a just transition must be one of the top priorities of the EU’s new leadership and we want to see progress towards achieving zero net emissions by 2050 through the Green New Deal promised by Ursula von der Leyen. The move to a carbon neutral economy must be done in a way that’s fair to workers, which is why the EU also needs a just transition strategy, including dedicated funds to pay for retraining and social protection as well as an investment plan to transform the EU economy while providing quality jobs.”

ETUC Confederal Secretary Ludovic Voet, responsible for climate change, said: “Working people and their families will be hit the hardest by the consequences of climate change, which is why we made the issue one of our top priorities at our recent congress. Trade unions need to be at the forefront of the climate movement to ensure that we achieve a green economy and society through a socially-fair transition that leaves no worker or part of Europe behind.”

“Climate crisis is worsening. That is a fact. As journalists, we have a duty to let people know what’s going on,” added Ricardo Gutiérrez, EFJ General Secretary. “It is high time the media considered climate crisis as the most important story in the world. It is a terrible threat to the human species and journalists have a duty to sound the alarm, to mobilize citizens. We cannot remain passive, under the pretext of respecting an alleged duty of impartiality or neutrality. We should give climate change the coverage it needs, taking into account that this is the biggest story of our lives.”

The Youth for Climate demonstration in Brussels on Friday, September 20 will begin at 1.30 pm at Gare du Nord station.