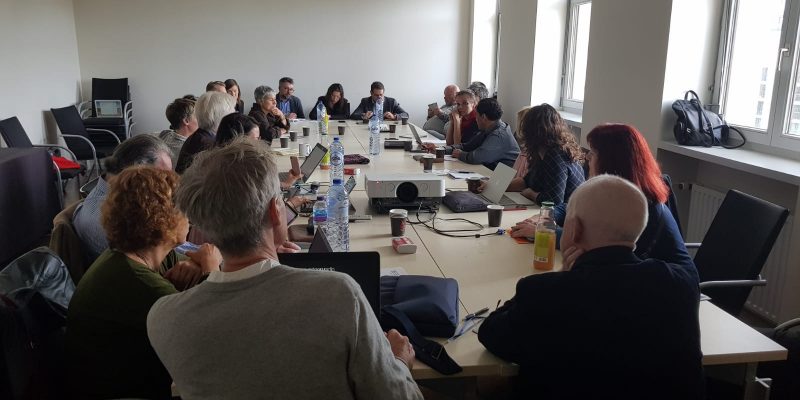 In the meeting held at the EFJ headquarters in Brussels, discussion over the development of the independence of PSM shows a worrying trend of political interference all over Europe, even in the “traditionally democratic countries” in Northern and Western Europe like Denmark and Austria.

Particular attention was also paid to the situation of Poland, where the PSM, is practically under the political control of the state and acts as the month-piece of the government rather than serving the public interest. Since 2015, over 250 journalists had either left their jobs or got fired because of their critical voice.

All the union representatives agreed upon the unacceptable justification of those pressures and defended that having a strong public service is important in every country. For that, experiences from different countries were shared as an exercise for the understanding of the complex reality that Europe is facing nowadays.

Meanwhile, journalists working in the Balkan and Eastern European countries, where broadcast media and specially public service is under constant threats: not only the political interference is strong, but journalists also face with harassment and violence.

The group also talked about new challenges facing PSM including the level of trust on PSM is declining and the challenge to engage young audience.

All BREG members agreed on addressing gender specific issues and needs in their meetings, taking into consideration the vulnerable position of the women in broadcasting media and the harassment that their exposure could imply.

The EFJ defends public service values, editorial independence, quality programmes and democratic and accountable systems of administration in broadcasting. As with other sectors, broadcasting journalists continue to face severe problems for their future, both in public and commercial organisations, as the working practices are changing, the working conditions of the journalists are being more precarious every day and newsrooms are experiencing more and more pressures, especially political interference.

On this basis, the EFJ co-ordinates discussions with unions, international organisations and other global groups dealing with media and the Broadcasting Expert Group is one of the five diverse groups that work for improving the working conditions of journalists and spreading media freedom in Europe.