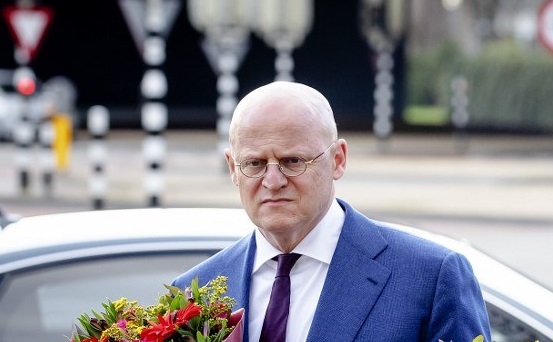 
The European Federation of Journalists (EFJ) joins its Dutch affiliate Nederlandse Vereninging van Journalisten (NVJ) in condemning a new law under which Dutch citizens travelling to an area “controlled by terrorist groups” must request permission from the justice ministry. This new regulation threatens the freedom to inform, EFJ said, calling on the Dutch senate to make an exception for journalists or to withdraw the bill.

The bill, proposed by the Dutch Minister of Justice and Security Ferdinand Grapperhaus (our picture), was approved by the Lower House on 10 September. Under the proposed law, failing to request the justice ministry’s permission before travelling to an area “controlled by terrorist groups” is punishable by up to two years in prison.

“Volkskrant” journalists Ana van Es and Jenne Jan Holtland called on the Senate in an open letter to amend the bill: “Journalists in conflict areas deserve protection, not a measure that puts them in extra danger”.

On November 12, the Senate will organise a hearing where experts, including a representative of NVJ, will draw attention to the law’s problems.

“This is an ill-considered law that goes against many constitutional principles and is applied only in three countries around the world,” said Thomas Bruning, NVJ General Secretary.

“Imposing such conditions of access on journalists and criminalizing their missions abroad is a blatant violation of the freedom to inform. We ask the Dutch legislator to amend this text or even withdraw it,” added Ricardo Gutiérrez, EFJ General Secretary. “The EFJ fully supports NVJ in its plea to withdraw or change this law.”

The EFJ submitted an alert to the Council of Europe Platform for the Protection of Journalism to denounce the Dutch draft law.