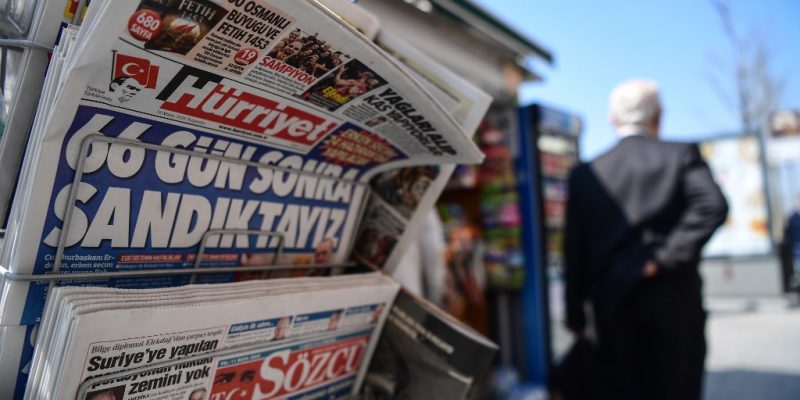 Turkey’s biggest newspaper Hürriyet fired 45 journalists last week in one of the history’s most brutal layoffs operation press in Turkey.  Forty-three of them were members of the Turkiye Gazeteciler Sendikasi (TGS), an EFJ affiliate.

The employees said that their dismissal was notified by a letter while they were working. A few journalists’  access to their computer and e-mail accounts were blocked. A woman was on maternity leave, one on compulsory military service and another journalist on sick leave, according to Turkish media reports. Vahap Munyar, Hürriyet’s editor-in-chief, who said he was not aware of the layoffs, and some of its most notable columnists resigned in protest.

Some of the journalists who were fired denounced that the newspaper administration targeted the increasing number of organised journalists. The Journalists’ Union TGS confirmed in a statement that 43 of the dismissed journalists were TGS members;  and the union was on the verge of clinching a historic majority in the newsroom to negotiate a collective agreement. According to the TGS, Hürriyet violated Turkey’s constitution by targeting unionised journalists.

“We all know that journalists in Turkey are going through dark days and this case is another attack against two fundamental pillars, the freedom of the press and the freedom of association. To the colleagues who lost their job: I would like to stress again that European journalists stand in solidarity with you. Be assured, we won’t let you down”, said EFJ President Mogens Blicher Bjerregård.

The EFJ joined the TGS in calling on the management of Hürriyet to respect the union rights of the employees and to sit down at the table with the union.

“No one can be forced to become a member or quit from the membership of a trade union. This is what Article 51 of the Republic of Turkey’s Constitution stipulates. Hurriyet fired 45 of our unionized colleagues last week. Some of these colleagues had spent half of their lives at Hurriyet and they have been fired only because they were members of our union”, said TGS President Gokhan Durmus.

Hürriyet, which was once the most influential newspapers in Turkey, was bought by the pro-government conglomerate Demirören Group and many of the critics say that the dismissals are part of the government’s plans against free speech.