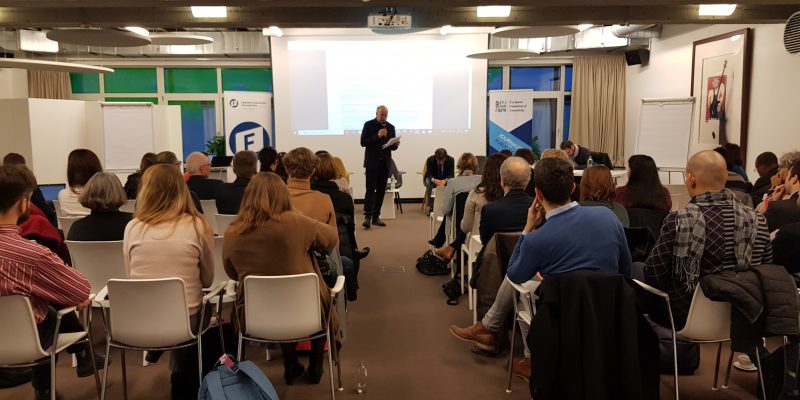 
The fight against hate speech should take place in schools and in the media. This was the starting point of the EU-funded project Silence Hate, which ended with a European conference organised by the European Federation of Journalists (EFJ) on Monday 18 November in Brussels.

After two years and 5 national workshops in schools; 15 young journalists trained, 10 journalistic pieces produced (available online); and one module for journalists on how to report migration and counter hate speech; the final event concluded that the awareness raising work should be continued in a more systematic way.

“Journalists have an obligation to counter hate speech: the best antidote to hate speech is education and public debate”, EFJ General Secretary Ricardo Gutiérrez summarised in his welcome remarks. Belgian cartoonist Nicolas Vadot was invited to draw cartoons live during the discussions (see the gallery below) and to share his view on political correctness and self-censorship on sensitive subject. “My task is to go against the current,” he said.

.@NicolasVadot, the cartoonist of #SilenceHate conference: "Education is a major part. We need to focus on that. That's what I always go to schools… It's fascinating: each time I hear a question I didn't expect" pic.twitter.com/fwUwUmWa5i

Tommaso Chiamparino, the European Commission’s coordinator on combating anti-Muslim hatred confirmed the institution’s commitment in fighting hate speech: “Hate speech laws have chilling efect on the freedom of speech… the Commission has developed programmes to support NGOs and relevant actors to improve quality of journalism.” Chiamparino made an open call for collaboration with journalists to raise awareness of the impact of hate speech on media freedom and communities.

Greek journalist Sotiris Sideris sharply pointed out the problem: “Too often journalists talk about refugees, but they don’t listen to them and don’t give them a voice. To avoid this pitfall, he produced a series of podcasts “A voice to the voiceless” focusing on stories that are unseen, underreported or undocumented by the mainstream media.

"We spend a lot of time reporting about immigrants, but we don't listen to them", says @SotSideris #SilenceHate

Al Jazeera correspondent in the United Kingdom, Laurence Lee, pointed out the journalists’ responsibility when reporting politicians’ discourses. He said that hate speech was used for profit-making like a viable business model: “Editors consider the stories interesting only if there are some elements of threats and jeopardies in it,” said Lee. However, Milan Zubíček from Google denied the fact that hate sells and can be used as a business model. Some initiatives like Stop Funding Hate were showcased as successful practices encouraging advertisers to stop funding newspapers that produce hateful content targeting migrants and refugees.

The conference also explored media tools and campaigns to counter hate speech. Blanca Tapia of the EU Agency for Fundamental Rights shared the recently launched e-Media Toolkit on migration. The toolkit includes concrete examples of media reporting and  illustrates the journalist’s dilemma to remain factual while telling human stories. The toolkit also includes a trainers’ modules. The Media Diversity Institute and the EFJ produced several modules for journalists in order to help them explore new formats, angles and sources.

Good practices were also shared on how to deal with hate speech from an educational point of view, the effectiveness of a media education strategy and the practical examples and theoretical references for the design of educational interventions, such as workshops and gamification. Alessandra Falconi from Italian NGO Zaffiria shared her experiences and difficulties with working with children and teenagers – sometimes in a very vulnerable position with special attraction for violence. Understanding how they think can help educators to counter hate speech among them.

Below you may find the gallery of the cartoons made by Nicolas Vadot during the event. Please make sure to seek the author’s approval if you want to use any of them.