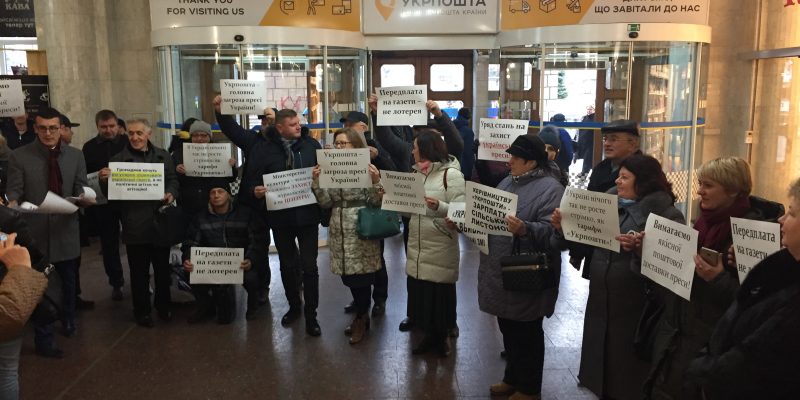 Ukrainian journalists and publishers jointly called on the Ukrainian government to swiftly address the shrinking newspapers’ circulation at the Forum of All-Ukrainian Editors and Publishers of Print Media, which took place in Kyiv on 21 November. Organised at the initiative of the EFJ affiliate the National Union of Journalists of Ukraine, the forum aimed to find solutions to tackle the print media critical situation, while two of the main Ukrainian newspapers, Segodnya and Dzerkalo Tyzhnia, recently gave up their print version to go exclusively online.

The participants denounced the systematic increase of tariffs by the Ukrainian national postal operator combined with the poor newspaper distribution. As a result, thousands of Ukrainians had difficulty accessing newspapers, in particular in villages where they are sometimes the only reliable source of information:

“We emphasised that the reason for the decline in newspapers’ circulation is not due to a loss of interest in print media but because of the poor quality of mail delivery. After all, a large number of places in the regions do not have Internet coverage at all,” said Sergiy Tomilenko, President of the National Union of Journalists of Ukraine.

The forum was attended by a hundred of editorial boards representatives as well as the Head of the Parliamentary Committee on Freedom of Speech Nestor Shufrych and MP from the Presidential party “Servant of the People” Tatiana Tsyba, Head of the State Committee for Television and Radio Broadcasting of Ukraine Oleg Nalyvaiko.

Nestor Shufrych stressed his support for Ukrainian publishers and promised to organise a special meeting in the Parliament with relevant committees, the government, publishers and the journalists’ union to address the issue.

EFJ General Secretary Ricardo Gutiérrez declares that “diversity of media is one of the key principles of freedom of expression. The state must create equally comfortable conditions to function for each of them. EFJ supports this initiative of the NUJU and calls on the Ukrainian government to help resolve this situation between publishers and the national postal operator”.