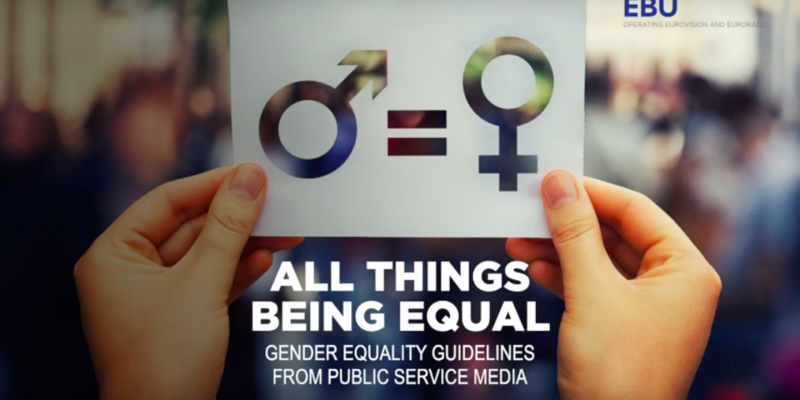 
Public service broadcasters have the capacity to shape public’s perception on gender roles and are leading the way in building gender-balanced workplaces. As public services they have the duty to reflect the societies they are informing. Many of them made gender equality a top priority in their workplaces which led to a change in their culture.

The European Broadcasters Union (EBU) has published a new report, ‘All Things Being Equal’, in where it shares their members’ own experience and good practices on equal opportunities, equal pay – gender pay gap in the EU is 19% -, work/life balance or protection from sexual harassment and discrimination, among other topics.

The report found that women represent 44% of the public service media workforce in Europe, but only 25% of executive positions.

The guidelines highlight four aspects that are important when it comes to building a gender-balanced workplace: assessing the situation with the use of data, engaging everyone (men and women), articulating and introducing policies that enable gender equality, and focusing on culture.

The report also gathers best practices in some European newsrooms, like the BBC (UK), where they discovered that a lot of women left the job following a maternity leave and rose awareness at the broadcaster’s top management.

In Spain, for example, RTVE created an Equality Commission in 2012 which published an equality plan and, since then, it has established two focus groups -involving senior leaders- and workshops on inclusive leadership, soft skills, female leadership and other topics that actually resulted in an an increase in the number of women in management positions.

In France, the women working at France Télévisions launched an internal network in 2013 called ‘Des Images et des Elles’ that aimed at addressing the representativeness and visibility of women in French media. The network today has about 400 active members.

These guidelines are useful for media organisations willing to draw new strategies for a more gender-balanced workplace, such as how to make a diagnose of the current situation, effective policies on equal opportunities as well as and leadership and behaviours ro retain the talent.