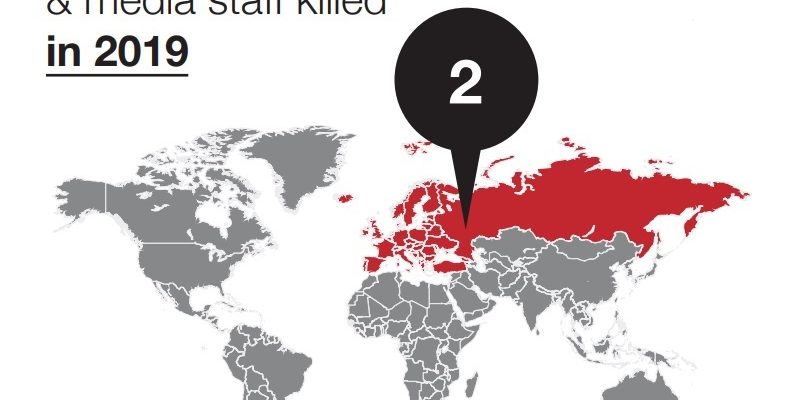 
The International Federation of Journalists (IFJ) has recorded 49 killings of journalists and media professionals in 2019, including two in Europe, a significant drop from 95 posted last year. The IFJ says that, while the apparent decreasing bloodbath in the journalists’ community is a welcome relief, the spread of killings and the motives behind the killings are sobering reminders that violence against journalists is still rampant and the failure to combat impunity for these attacks remain a damning indictment on those in power.

The IFJ lists 18 countries from the four corners of the world where journalist were killed since the start of the year, including Africa (9), Asia Pacific (12), Europe (2), Latin America (18) and the Middle East and Arab world (8).

The death toll is the lowest since 2000, when 37 journalists and media staff were killed, but the causes of the loss of life during 2019 remain largely the same. Mexico tops the list of dangerous countries with 10 killings of journalists whose reporting crossed corrupt officials and drug barons, while targeted attacks claimed the lives of five journalists in Afghanistan and four in Pakistan.

After the sad record of 12 deaths in 2015, mainly as a result of the massacre perpetrated by the editorial staff of the weekly “Charlie-Hebdo” in Paris, France, the situation is tending to stabilize in Europe: three deaths in 2016, five in 2017, four in 2018 and two in 2019. On the other hand, the number of cases of impunity for the murder of journalists in Europe is on the rise.

The Council of Europe Platform for the Protection of Journalism and the Safety of Journalists officially records 36 cases of impunity for murder in Europe, including 14 murders and disappearances of Serb and Albanian journalists in Kosovo. The other countries concerned are: Russia (6 impunity cases), Ukraine (6), Turkey (4), Azerbaijan (2), Malta (1), Montenegro (1), the United Kingdom (1), and Serbia (1).

The IFJ President Younes Mjahed calls on governments to address their failure to stop the impunity for these crimes through the UN Convention on media safety promoted by the IFJ. “We also call on European governments to fully implement without any delay the Council of Europe Recommendation on the protection of journalism and safety of journalists and other media actors,” added EFJ President Mogens Blicher Bjerregård.