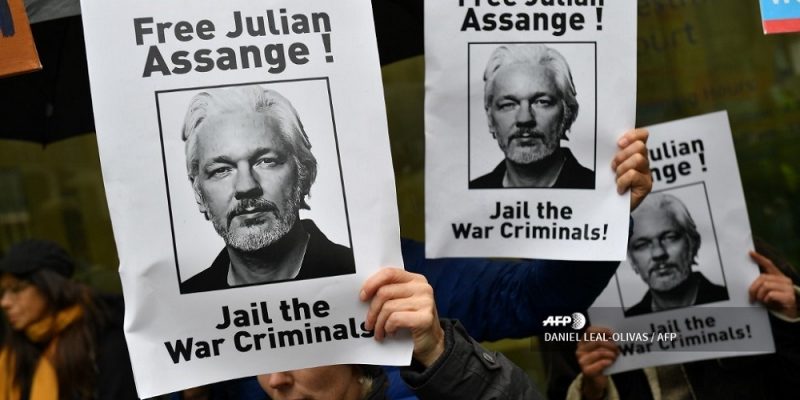 
Julian Assange, publisher of Wikileaks, is currently detained in Belmarsh high-security prison in the United Kingdom. He faces extradition to the United States and criminal prosecution under the US Espionage Act. He has been charged for publishing the Afghanistan and Iraq war diaries and US embassy cables, important documents that many journalists around the world used and helped to publicise. The “War Diaries” provided evidence that the US Government misled the public about activities in Afghanistan and Iraq and committed war crimes.

“We believe that the arbitrary detention and criminal prosecution of Julian Assange set an extremely dangerous precedent for journalists, media actors and freedom of the press,” said EFJ General Secretary Ricardo Gutiérrez. The European Federation of Journalists submitted today an alert to the Council of Europe Platform for the Protection of Journalism and the Safety of Journalists and other Media Actors, in order to denounce the continued arbitrary detention and psychological torture of Julian Assange.

Many jurists, politicians, journalists and academics consider that the arrest of Julian Assange constitutes an attack on freedom of the press and international law: his arrest by police in the UK, after the Ecuadorian Government decided to stop granting him asylum in their London embassy, and his prosecution in the United States for publishing leaked documents of public interest set a dangerous precedent for journalists, whistleblowers, and other media actors that the US may wish to pursue in the future.

Julian Assange was arrested by the British police on 11 April 2019. Later that day, he was found guilty of breaching the UK Bail Act. On 1 May 2019, he was sentenced to 50 weeks in prison in the United Kingdom. On the same day, the United States government unsealed an indictment against Assange for alleged computer intrusion, related to a series of leaks provided by U.S. Army intelligence analyst Chelsea Manning. On 23 May 2019, the United States government further charged Assange with violating the Espionage Act of 1917.

In reaction to the latest charges of violating the US Espionage Act, the General Secretary of the National Union of Journalists (NUJ), Michelle Stanistreet, said: “Such a move poses a huge threat, one that could criminalise the critical work of investigative journalists and their ability to protect their sources. It is the latest unacceptable act from an administration determined to treat journalists as enemies of the people.”

The EFJ shares, together with the IFJ, the concerns expressed by the “Speak Up for Assange” campaign, launched on 6 December 2019: “This case stands at the heart of the principle of free speech. If the US government can prosecute Mr Assange for publishing classified documents, it may clear the way for governments to prosecute journalists anywhere, an alarming precedent for freedom of the press worldwide. Also, the use of espionage charges against people publishing materials provided by whistleblowers is a first and should alarm every journalist and publisher. In a democracy, journalists can reveal war crimes and cases of torture and abuse without having to go to jail. It is the very role of the press in a democracy. If governments can use espionage laws against journalists and publishers, they are deprived of their most important and traditional defense – of acting in the public interest – which does not apply under the Espionage Act.”

After examining Assange in prison on 9 May 2019, United Nations special rapporteur on Torture and Other Cruel, Inhuman or Degrading Treatment or Punishment Nils Melzer concluded, “in addition to physical ailments, Mr Assange showed all symptoms typical for prolonged exposure to psychological torture, including extreme stress, chronic anxiety and intense psychological trauma.”

In a letter sent on 29 October 2019 to the UK government, Melzer wrote: “I found that the UK had contributed decisively to producing the observed medical symptoms, most notably through its participation, over the course of almost a decade, in Mr Assange’s arbitrary confinment, his judicial persecution, as well as his sustained and unrestrained public mobbing, intimidation and defamation. (…) British officials have contributed to Mr Assange’s psychological torture or ill-treatment, whether through perpetration, or through attempt, complicity or other forms of participation. (…) Recurring and serious violations of Mr Assange’s due process rights by UK authorities have rendered both his criminal conviction and sentencing for bail violation and the US extradition proceedings inherently arbitrary. (…) Mr Assange’s state of health has further deteriorated and has recently entered a down-ward spiral which may well put his life in danger. (…) The detention regime currently imposed on Mr Assange appears to be unnecessary, disproportionate, and discriminatory and to perpetuate his exposure to psychological torture or other cruel, inhuman or degrading treatment or punishment.”

In November 2019, Melzer recommended that Mr Assange’s extradition to US be barred and that he be promptly released.

The EFJ calls on journalists and people in journalism-related roles to sign the international journalist statement in defence of Julian Assange.

Dangerous times call for fearless journalism.
We urge all journalists to speak up in defense of Julian #Assange at this critical time:https://t.co/HVLIpFi0wX