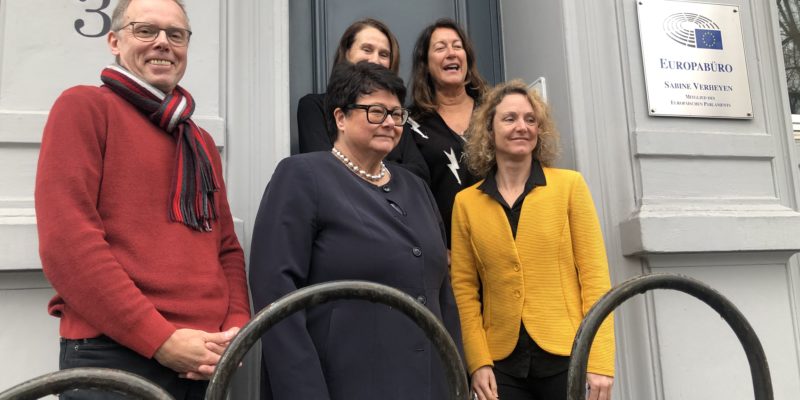 On 27 January, a delegation of journalists from the Europa Commission of the Deutscher Journalisten-Verband (DJV) together with EFJ Director Renate Schroeder met with German MEP Sabine Verheyen (EPP) the chair of the European Parliament’s Committee on Culture and Education in her national office in Aachen (Germany).

Headed by its chair Steffen Heinze (Deutsche Welle), the meeting discussed many issues of importance to journalists.

Verheyen addressed the increasingly precarious situation of journalists in Europe and expressed great concern about the increased violations against media freedom, the problem of disinformation and in particular the phenomenon of “deep fake”. The issue of artificial intelligence and digitisation is imminent in the creative sector and a hearing will be organised soon to prepare an own initiative report  focusing on content, “quality”, transparency and human control. Media literacy in schools and an improved training for journalists is certainly another must.

The issue of sustainability of journalism, local media and pluralism is high on her agenda, as well as the implementation of the copyright directive in which she showed a special interest for ensuring a fair share for journalists. She was very interested in receiving the fact finding mission reports on Hungary, Czech Republic and Austria.

“Given its political importance it is crucial that the new European Commission coordinates and pools all portfolios regarding media” Sabine Verheyen said.

The meeting also discussed the idea that had been initiated by the director of the Bayerischer Rundfunk, Ulrich Willhelm, to create a “European digital infrastructure”. Public and private broadcasters, publishers, but also institutions from science and culture “and many others” should be able to participate in the platform. In order to keep up with the major platforms from Silicon Valley, Verheyen agrees that we need “a kind of European YouTube with elements of Facebook for direct exchange with users, as well as a good search function” – in other words, an offering that has learned from US tech companies, but is based on European values of diversity, quality and openness.

“We must create a positive mood in EU member States, but also among European providers, both public and private, in order to achieve this”, suggested Verheyen.

Renate Schroeder urged Verheyen and the EPP to support the media sectors’ demands in a clear journalists’ exception and exclusion for the media sector regarding the E-evidence draft regulation which is at the moment discussed in the European Parliament.

The EFJ together with the publishers’ organisations ENPA, EMMA, News Media Europe, the EBU and private broadcasters ACT as well as the media union UNI-MEI call for protection of the European media sector and its contribution to democratic societies.