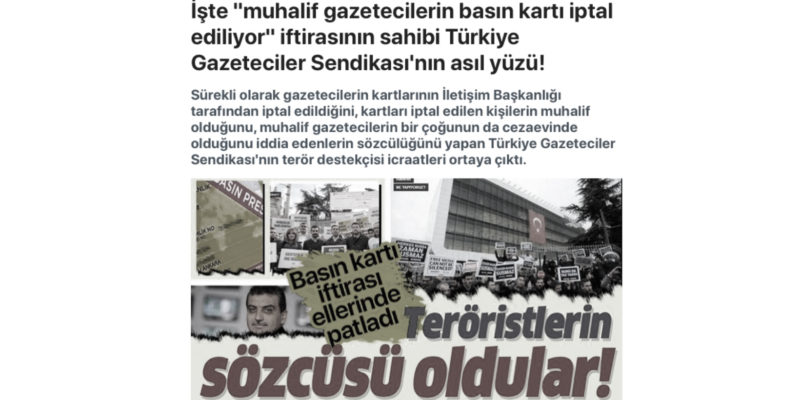 A pro-government newspaper based in Istanbul has blasted the Journalists’ Union of Turkey (TGS), gearing up the official narrative that labels jailed journalists as “terrorists.”

“Here is the real face of the Journalists’ Union of Turkey, which flung dirt by alleging that the press cards of opposition journalists were canceled [by the government],” the Takvim daily said on its headline on January 27.

Several journalists, including those that work at opposition dailies Evrensel and BirGün, had noticed last week that their pending applications for press cards renewals were rejected by the Presidency’s Communication Directorate when they checked the official body’s website.

After journalists’ protests, which included a demonstration by the TGS in front of the institution’s headquarters in Ankara, the decision was revoked. As of January 28, the applications were still on the pending status on the website.

Amid the uproar, Takvim characterized TGS’ defense of journalists’ rights as a “crime” and its efforts for the release of 85 journalists in prison as “becoming terrorists’ spokespersons.” The newspaper also published photos of press freedom demonstrations, including those that featured TGS board members, that were held to protest the shutting down of Zaman daily and Jin News Agency.