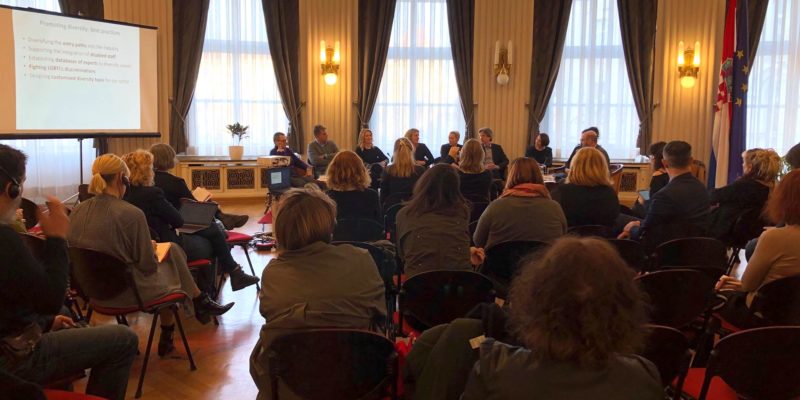 Croatian film producers, performers, broadcasters, film directors, journalists and researchers convened to share experiences and key findings and pointed at the lack of female presence in audiovisual content as well as in leading roles.

According to a recent ILO report published in March 2019 women represent 39% of the global workforce, but make only 27% in management positions.

Despite the feminisation of the news sector, women only represent 24% of the persons heard, seen or viewed in news content (GMMP 2015), while they make 16% of media CEOs (EIGE 2012). According to a 2017 IFJ survey, almost half of women journalists have experienced online abuse.

In the Croatian film and production sector, the situation is also grim. “Of the 209 films produced between 1990 and 2018, only five women were involved as producers and only 15 as film directors. The only group with a female majority was in costume design where 189 women worked, but it is because it is a difficult and poorly paid job, ”said Katarina Zrinka Matijević of the Croatian Film Directors Association.

Professor Victoria Carr from Zagreb University of Political Science pointed at women making the majority of journalism students (70%) in Croatia while only representing 5% of news sources.

Television journalist and member of the Croatian Journalists Union Elizabeth Gojan warned against sexism in the media, where women are portrayed as exclusively sexualized and stereotyped, and where they are criticized when victims of violence and rape . She encouraged women journalists to stand up for their rights and demand equal pay providing a few tips on how to negotiate wages individually.

Spanish journalist Carmen Mudarra from CCOO pointed at the importance to use appropriate and accurate language in news report, the need to strengthen gender equality in collective bargaining and to report fairly about minorities. She further introduced CCOO’s latest guide on reporting sexual, gender and family diversity in mass media.

Here you have some of the supporting presentations used during the event: