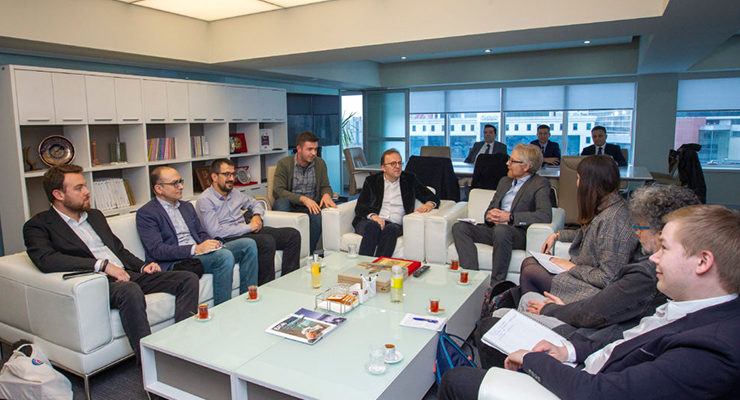 
Today, the International Press Institute (IPI), the European Federation of Journalists (EFJ), the Journalists Union of Turkey (TGS), Reporters without Borders (RSF) and the Committee to Protect Journalists (CPJ), called for an immediate end to the ban on public advertising on the two independent newspapers Evrensel and BirGün.

Both newspapers are part of a shrinking club of media that have stubbornly resisted pressure to curb their independent journalism and readiness to criticize the authorities. Since September they have been subjected to indefinite bans imposed by BIK (Basin Ilan Kurumu), the agency responsible for the distribution of the state advertising budget.

Should the bans remain in place for six months (until March) the newspapers will be formally excluded and unable to reapply for funding for three years. Such a result would be catastrophic for the economic viability of the newspapers.

On Thursday, February 6, the delegation of press freedom groups met with the director of BIK, Rıdvan Duran, and were told that Evrensel and BirGün had breached technical regulations regarding the crediting and sourcing of articles and their means of distribution. Duran insisted that BIK’s ban was not related to their editorial line and that both newspapers still had time to correct their practice to be once more eligible for public advertising funds.

Evrensel has been banned since September 18, accused of bulk buying that distorts their distribution figures against which measure the advertising levels are set. Evrensel is a small leftist newspaper some of whose supporters place group orders of editions before distributing them through their local networks. It is a practice that Evrensel has had in place since they were first appointed to the distribution scheme in 2011.

In September 2019, BIK ruled however this practice as bulk purchasing and against the regulations. BIK added that when municipalities or travel companies purchase papers in bulk for distribution to employees or passengers, they are registered at no more than 50 copies even when the numbers sold are in their hundreds.

BirGün newspaper also received an indefinite ban at the beginning of September. The initial charge was a failure to submit distribution figures in time. When that was resolved BIK added a new charge that BirGün had failed to properly credit authors or sources in its articles.

The secular daily Cumhuriyet also received a short-term ban in September for a report ruled to have “humiliated the Turkish security forces”. While the paper does not currently face the threat of a permanent ban, the delegation expressed concern about how this power could be misused to stifle legitimate criticism.

BIK was first established in 1961. In 2013 its structure was changed to enable it to impose bans for breaches of its code. It has a General Assembly made up of members appointed by the government, the media industry and civil society. In August 2019 Rıdvan Duran was appointed as the new director.

“Turkey’s independent media have been under extreme pressure in recent years with around 170 outlets closed in 2016 and the remaining subjected to hundreds of prosecutions against their journalists”, the press freedom delegation said. “Rıdvan Duran has given his assurance that the bans are not politically motivated and can be swiftly resolved. It is imperative that he is true to his word and that the advertising bans are swiftly lifted.”

The EFJ submitted an alert based on the Turkish ban to the Council of Europe Platform for the Protection of Journalism.