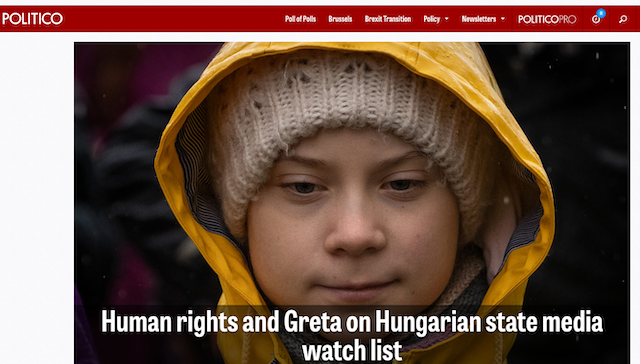 Politico Europe revealed on 2 March that internal emails were sent to Hungarian state media staff to inform about new editorial rules when reporting about Swedish activist Greta Thunberg, “sensitive topics” and when quoting human rights organisations’ reports. The instructions were dated from the second half of 2019.

According to the emails, these new rules require staff to request permission before writing on Greta Thunberg and to send draft content for approval from “higher up” ahead of publication on migration, EU politics, terrorism, church issues. They also explicitly prevent journalists from mentioning reports from Amnesty International or Human Rights Watch.

The European Federation of Journalists (EFJ) denounced another attempt from the Hungarian government to control the media and impose its own narrative. “Journalists’ work consists of informing the citizens about public interest information, not to please the government with biased reports on chosen topics, reminded the EFJ General Secretary Ricardo Gutiérrez. It is about time to recognise the gravity of the media freedom situation in Hungary.”

The Hungarian Press Union’s (HPU) said: “free, independent and responsible journalism must be the norm for every politician, political party, media owner, manager and leading editors of every media outlet, and this is even more important for public media.”