World Intellectual Property Day 2020: “Some are trying to water down the EU Copyright Directive” 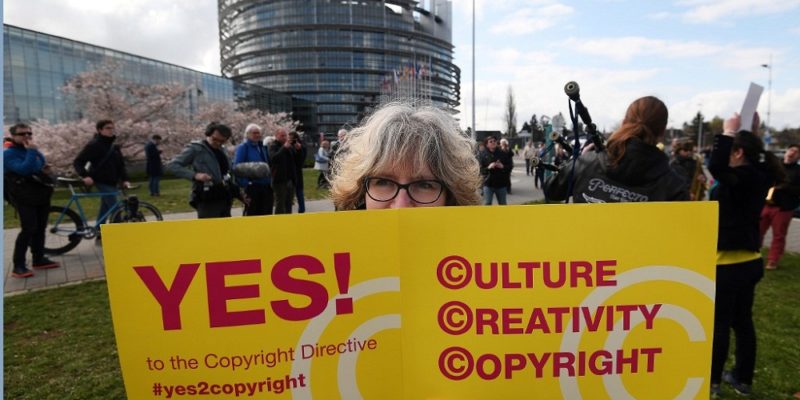 
On World Intellectual Property Day 2020, April 26, the European and International Federations of journalists (EFJ-IFJ) are putting the spotlight on the so-called “publishers’ right”, one of the key achievements of the EU Copyright Directive in the Digital Single Market, interviewing three copyright experts of the EFJ Authors’ Rights Experts Group (AREG).

Michael Khlem,Senior advisor of the Deutsche Journalisten-Verband (DJV), the German Journalists Association, one of the largest journalists’ organizations in Europe.

Olivier Da Lage, a journalist at Radio France International and board member of the Syndicat national des journalistes (SNJ), and a member of the Conseil supérieur de la propriété littéraire et artistique ;

And Olle Wilof, Copyright and media law expert at the Swedish journalists’ union the Jornalistforbundet (SJF), and representative of authors and journalists in MO-organizations in Sweden. Olle has represented authors in several court-cases, including the Svensson-case brought before the European court of Justice (nr: C-466/12).

Michael Klehm, there was a strong push from press publishers in Germany for the adoption of the Directive. What is your take on the legislation, its new “publishers’ right” (Article 15), and what is the situation in Germany on that front?

The Directive is not perfect, but it gives us tools to defend authors’ rights in the digital economy and ensure that remuneration is shared with journalists fairly. It is important to stress that the adoption of the legislation was only made possible thanks to the cooperation between authors’ organisations in the creative industries, which faced incredibly heavy lobbying by tech giants against the proposal.

This legislation includes important provisions for our industries and authors. It offers the press sector and journalists a share of the revenue their work generates online (new neighboring right for press publications), introduces the principle of appropriate and proportionate remuneration for authors, as well as key transparency obligations, alternative dispute mechanisms and the possibility for authors to be represented by their unions. These had been one of our key demands for years.

A year has passed since the Directive was adopted, but we are still at the beginning of national transposition processes in most EU Member States. We must be aware of ongoing efforts in many of these countries to water down the rights secured in the Directive. In Germany, the government started the transposition process by issuing a series of discussion papers for the different articles and regulations in the Directive, including on Article 15, which is currently being discussed by national stakeholders.

France is the country where things have moved the fastest, with the law transposing Article 15 enacted on 24 July last year. But then Google refused to negotiate and everything stalled until the French competition authority’s decision a couple weeks ago to force the company to negotiate and reach an acceptable agreement with French publishers within three months. Olivier Da Lage, what are journalists’ concerns and demands in this context?

The transposition law which entered into force last October had been in the pipeline for a while. We are generally satisfied with the texts which guarantee the remuneration of journalists, freelancers, photographers and other media workers and authors of press contents.

We slammed last October Google’s attitude and called for action against what we believe is an abuse of dominant position. The Competition Authority’s measures were essential. But we do not forget that the hardest part for us during the EU campaign was to obtain a fair share for journalists.

I want to stress, in line with the legislations, that this new right cannot be invoked by companies against journalists nor does it affect their right to use their publications independently. In addition, their existing rights and their share of new neighboring rights are entirely distinct, they don’t overlap, the new income must simply be added to the exisiting one.

We called and will continue to promote collective management of this right, even if the law does not provide for it. We also demand transparency and the establishment of independent bodies responsible for monitoring usage data, revenue calculation, and rights management.

The law provides that negotiations at company level should take place within six months from its entry into force. It has now become urgent to start discussions and define remuneration criteria.

Let’s have a closer look now on some of the technical aspects. Olle Wilof has highlighted a series of common questions raised in Sweden, in relation to Article 15: is the existence of a print/paper publication a condition to benefit from the new right?

No, newspapers and magazines as print publications are covered, so are webpages, if their contents are in line with Article 15. This means that “pure” on-line players will benefit, but it depends to some extent, on national transposition and agreements.

They shouldn’t, for their news contents published online and listed by news agregators and search engines. But it depends on the definition of a press publisher in national laws. However, a press publisher offering broadscasting materials on its webpage cannot be disqualified. If that is the case, many media companies with “newspapers-trade-marks-” will not be protected at all.

They are. The directive excludes scientific publications, but the specialised press should benefit. However, it is difficult in the online environment to really tell what kind of magazines – some cover beauty, health and science, food/wine etc – are “press publications”.

Are self-publishers and other authors covered?

Yes, in theory an author’s website may be considered as a press publication in the sense of Article 15 – unless it is classified as a “blogg”. Other authors of news contents should all get a share of the remuneration their publisher will receive for the use of their works online.

Apart from news articles /text – are other types of media-content in web or print edition covered? For instance trademarks, photos, drawing, images, etc.

Yes, if they are part of a press publication and not in the public domain…

There is a question about the notion of re-use and the protection term, two years. Should the material be new /never used in any form before? can publishers benefit from the revenue for new editions re-using old material?

The right is only valid for 2 years from the publication, so within that period if it is published by several media and listed online for all of them, all copyright owners should theoretically receive/share the remuneration. The way the protection is constructed makes it possible, in theory, for publishers to reuse some material  (example, archive photos), and keep the protection for those renewed.

This interview was facilitated by Sarah Bouchetob, Senior campaigner, and Authors’ rights adviser at the International and European federations of journalists. It is drawn from discussions with the interviewees in preparation of an EU funded project “Trust and quality in journalism“.