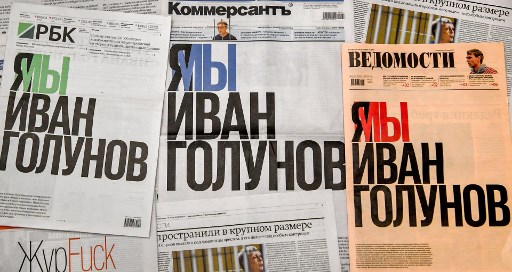 In March, Vedomosti was sold to Konstantin Zyatkov, the publisher of Argumenty i Fakty, a weekly newspaper owned by the Moscow government, and to the businessman Alexei Golubovich, an oligarch and former top executive at the Yukos oil company. In the following days, they publicly announced that nothing would change under the newly installed chief editor Andrei Shmarov.

However, according to the company’s journalists the situation deteriorated, and on 23 April, Vedomosti journalists wrote an editorial where they asked for the removal of Andrei Shmarov due to his efforts to censor articles and information.

Among others, Shmarov allegedly removed an online article written by economist Konstantin Sonin from University of Chicago and banned the publication of data from independent pollster Levada Center about the Kremlin’s latest policies. The Levada Center is an independent Russian institute that recently revealed the fall in popularity of President Vladimir Putin.

On the night of 12-13 April, the new interim editor Andrei Chmarov deleted an article critical of the management of the state oil company Rosneft. On 30 March, he changed the negative-sounding title of a report on the company.

Vedomosti journalists wrote: “Vedomosti will become just another dependent and controlled media outlet whose task won’t be fulfilling the needs of its readers with verified news and high-quality analysis, but fulfilling the interests and ambitions of its official and unnamed owners”

The Russian Union of Journalists (RUJ) strongly opposes any attempt of censorship and advocates for the social and labor rights of journalists. “We have already expressed and confirmed our intention to resolve the conflict at the editorial office. We are ready to provide our colleagues with the necessary support and take all necessary measures to preserve freedom of speech and journalism”.

The IFJ said: “We are appalled by the level of censorship facing Vedomosti ‘s journalists and call on the newspaper’s owners to respect press freedom and the public’s right to know. We urge the owners of this well-respected publication to prevent any interference with the independent work of Vedomosti‘s journalists”.

The EFJ General Secretary added: “What’s happening in Vedomosti’s newsroom reminds us the brutal editorial interference of Kommersant by the newspaper’s owner, influential billionaire businessman Alisher Usmanov. It seems that the oligarchs close to the Kremlin are acting in a concerted manner to put an end to the independent Russian press.”