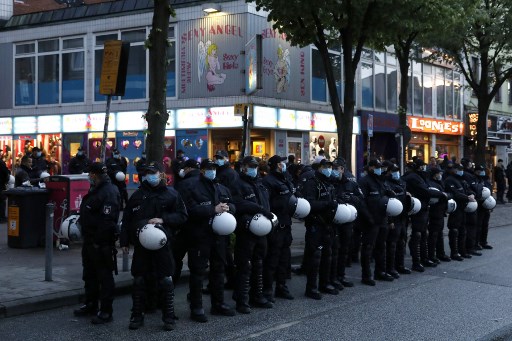 
Media Freedom Rapid Response (MFRR) partners are concerned about the increased violence against media professionals at protests and demonstrations across EU Member States and Candidate Countries in the last months and call for increased protection.

The recent violent attacks against media workers during demonstrations in Germany, three assaults in a few days, and similar threats witnessed across Europe, are establishing a worrying trend. The right to free assembly and association is a vital underpinning of a modern and pluralist democracy and has itself come under significant threat across Europe. However, threats against the press and media further weakens their ability to cover demonstrations and to inform the public accordingly. This further undermines the public’s ability to access information and take an active role in civil society.

Attacks against journalists and media workers at protests or demonstrations come from a number of sources, including participants of the protests, activist groups or police officers deployed to maintain public safety. Police across Europe have deployed increasingly militarised tactics when responding to protest movements, including the use of non-fatal firearms, tear gas and aggressive crowd dispersal tactics. Even when journalists and media workers are clearly identified, they have been attacked as part of the police’s response to the protest in general. Police violence against media workers is unacceptable, as is police surveillance of journalists.  The European Centre for Press and Media Freedom (ECPMF) and partners launched the Press Freedom Police Codex to respond to this threat at the end of 2019.

Further to this, journalists and media workers covering movements are increasingly targeted by politicians and proposed laws restricting the free flow of public interest information. This threat is heightened at times of civil unrest and uncertainty, such as elections, economic disruption, constitutional issues and the ongoing COVID-19 pandemic. At a time where we need a free media and press more than ever, journalists and media workers are being threatened with arrest, detention and violence.

Further to this, the ongoing violence against journalists in France or the 2019 murder of Lyra McKee when covering rioting in Derry demonstrate the need for meaningful and substantial protections for journalists and media workers. There have been a number of documented cases across the EU and candidate countries of journalists being threatened at protests including:

Spain: According to analysis by Media.cat, in October 2019, approximately 70 journalists were injured during protests sparked by the arrest of pro-Catalan independence leaders in Spain, with 69% of the assaults provoked by police forces, either deliberately against journalists or as a result of generic charges against protesters.

France: During protests organised by the gilets jaunes (yellow vests) movement and general strikes across France, journalists have faced a very high level of violence: more than 120 incidents involved journalists and more than 54 journalists have been injured. Nadège Picard was hit by a shot from a riot gun (LDB) and a shot from a grenade launcher in Toulouse; and Taha Bouhafs, Gaspard Glanz and Mustafa Yalgin were all injured, similarly from tear gas grenades used by the police officers during protests in Paris.

Slovenia, Poland and Italy: States across Europe have responded to the COVID-19 pandemic by targeting journalists and media workers. The Slovenian Interior Minister, Aleš Hojs called for journalists and media professionals who reported on anti-lockdown protests to face criminal prosecution. In Turin, a photojournalist working for La Stampa was threatened and had his SD card stolen while documenting a protest over coronavirus restrictions at a local street market. In Warsaw, on 8 May 2020, Paweł Rutkiewicz, a Gazeta Wyborcza reporter, was arrested by police during a protest despite showing his press card.

Greece: As refugees and asylum seekers from North Africa and the Middle East sought refuge in Europe, a number of journalists documenting this were threatened or attacked. On 1 March 2020, Giorgos Christides of Der Spiegel newspaper was harassed, intimidated and attacked by local protesters as he covered the arrival of refugees and migrants on Lesbos. In January 2020, during a protest meeting on refugee–migration issues in Athens, a group of right-wing extremists attacked the Deutsche Welle correspondent, Thomas Jacobi.

When media workers are attacked, threatened or unlawfully detained, full, independent and robust investigations are vital to ensure that journalists and media workers are able to continue working, others are not threatened into silence and the public can be informed about the public movements or protests demanding change, both in their native country and across Europe.

The undersigned organisations call on European institutions and the national authorities to guarantee the safety and protection of media professionals during demonstrations and protests.

Recommendations for protest or demonstration organisers:

[2] Besides the ECPMF “Feindbild” report, also a new study by Uni Bielefeld shows that hate against journalists is widespread: 60 percent of those questioned were affected by hate speech last year. Many report physical attacks.

Institute for Applied Informatics at the University of Leipzig (InfAI)