EFJ in solidarity with journalists covering protests in the U.S. 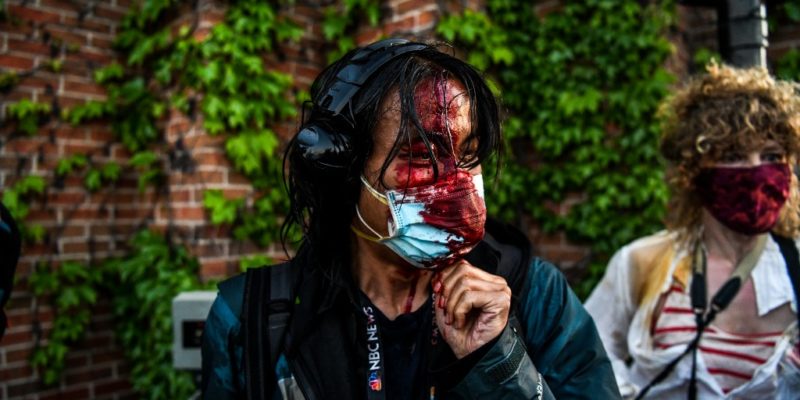 A journalist is seen bleeding after police started firing tear gas and rubber bullets near the 5th police precinct in Minneapolis following a demonstration to call for justice for George Floyd. Picture credit: Chandan Khanna / AFP.

The European Federation of Journalists (EFJ) today expressed full solidarity with journalists targeted by police and protesters while covering demonstrations across the United States.

Journalists’ organisations in the U.S. counted over 60 incidents in which reporters were injured or harassed by protesters or police officers, following demonstrations to call for justice for George Floyd, a black man who died while in custody of the Minneapolis police, on May 30, 2020 in Minneapolis, Minnesota. Attacks and arrests of journalists in recent days were reported in Louisville, Kentucky; Las Vegas, Nevada; Atlanta; and Washington, D.C.

The EFJ welcomed the statement issued on 30 May by Secretary-General of the
United Nations António Guterres: “When journalists are attacked, societies are attacked. No democracy can function without press freedom nor can any society be fair without journalists who investigate wrongdoing and speak truth to power.”

“Intimidation of journalists in the U.S. must stop,” reacted the EFJ President Mogens Blicher Bjerregård. “Public authorities across the U.S., at federal and local level, must instruct police officers not to target journalists and ensure they can report safely on public protests.”

No democracy can function without press freedom nor can any society be fair without journalists who investigate wrongdoing and speak truth to power.

I am worried about the increase of violent incidents against journalists covering #GeorgeFloydProtests in the #USA, by the police and demonstrators. I call on the authorities to exercise restraint and to ensure that journalists can report safely on public protests. #JournoSafe