Press Cartoonists in Europe must be protected 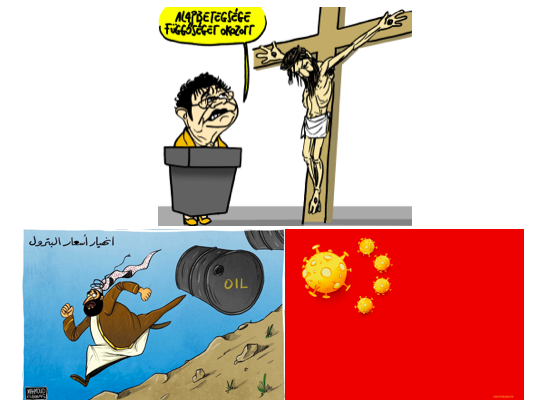 
The European Federation of Journalists (EFJ) joins MFRR partners call for press cartoonists to be protected to ensure they can realise their right to free expression across Europe.

Across the European Union and Candidate Countries, cartoonists have been targeted for their work by state and non-state actors from within and outside Europe. This includes online harassment and threats, attempted censorship and legal prosecution. The MFRR partners, joined by Cartooning for Peace (CfP) and Cartoonists Rights Network International (CRNI), condemn these attacks against press cartoons, which have grown in number as a result of the ongoing COVID-19 pandemic and reiterate their support to all cartoonists under threat.

Last year, Cartooning for Peace and Courrier International declared 2019 a terrible year for press cartoonists, raising the alarm about the threats facing cartoonists including Musa Kart in Turkey, where he and his colleagues at Cumhuriyet were imprisoned for 142 days until the Turkish Supreme Court ordered their release. While Kart remains free, due to his criminal conviction, he could be returned to prison at any time as part of the country’s continued clampdown against press freedom.

Many cartoonists are targets of seemingly arbitrary acts of censorship, including restrictions on social media platforms used to promote their work, such as Spanish cartoonist Miguel Villalba Sanchez’s apparent blacklisting on Facebook, or more tangible attempts to restrict their work. In December 2019, Palestinian cartoonist, Mohammad Saba’aneh’s work displayed in an exhibition at the International Criminal Court (ICC) in The Hague disappeared without explanation and once retrieved, his work had to be placed under police guard to ensure it remained in place. Some press cartoonists, like the Russian cartoonist Denis Lopatin, were forced into exile in order to avoid jail time.

Today, the undersigned organisations are particularly worried by how a number of countries are using the COVID-19 pandemic to target and threaten political cartoonists beyond the reach and scrutiny of the public. The Mapping Media Freedom platform has been monitoring serious violations targeting cartoonists in Europe:

In Hungary, Gábor Pápai was threatened with lawsuit for so-called “blasphemy” by two political party leaders after he published a cartoon showing Jesus on the cross in the opposition daily Népszava, on 28 April. The cartoon represents a member of the government’s ‘Coronavirus Task Force’ making a declaration about the COVID-19 situation. It made reference to the government’s previous statements which minimised the extent of the virus by stating that deceased victims were “predisposed” to die due to pre-existing pathologies. Since the announcement of the lawsuits, the cartoonist has also been facing a campaign of threats and intimidation.

A number of threats against cartoonists in Belgium, The Netherlands and Denmark in January 2020 emerged from their depiction of China’s relationship with the COVID-19 pandemic – a Chinese flag with virus-like symbols instead of the yellow stars. After Belgian cartoonist, Lectrr published a cartoon on his social media account, as well as in the Belgian daily De Standaard, the association of Chinese companies in Belgium and Luxembourg, the Chinese Embassy, the Chamber of Commerce, the Bank of China and the Cultural Attaché in Belgium demanded the cartoonist’s dismissal and the removal of the cartoon. Lectrr also received numerous insults and a death threat, which was serious enough to warrant being reported to the police. Similar requests were made by the Chinese Embassy in Denmark to Niels Bo Bojesen and his work in the daily Jyllands-Posten. Dutch cartoonist Maarten Wolterink received hundreds of insults online after publishing a similar cartoon.

In Sweden, a cartoonist of Palestinian origin Mahmoud Abbas received a stream of insults, hate speech and death threats on social media networks following the publication of a cartoon about the collapse of international oil prices in April, as a result of the COVID-19 pandemic. The cartoon went viral in Saudi Arabia as the character – drawn in a Gulf Arab dress and escaping a rolling barrel of oil – was identified by the audience as crown prince Mohammed Bin Salman. Comments referred to Abbas as a “terrorist” and personal information about his family and his location in Sweden was shared. Although Abbas is a Swedish citizen, many social media users directed their condemnation of him to Swedish politicians in an apparent bid to threaten his citizenship status.

As highlighted in the cases of Mahmoud Abbas and the coordinated responses in Netherlands, Belgium and Denmark, there is a growing concern of cartoonists based in European countries being targeted by representatives, citizens or trolling networks from outside the region, with few available protections. In a similar manner, diplomatic interventions exert a significant pressure on cartoonists, many of whom are unable to depend on employers or other bodies for the necessary support and protection. The threat against Jyllands-Posten in Denmark led Utgivarna, which represents Sweden’s private and public sector media, to publish a statement criticising the pressure directed at journalists by Chinese government representatives: “Time and again, China’s ambassador Gui Congyou has tried to undermine the freedom of the press and the freedom of expression under the Swedish constitution with false statements and threats.” Left unchallenged, these interventions can threaten cartoonists into silence, make publishers such as newspapers unwilling to publish their work and encourage broader self-censorship across the EU.

In light of these recent attacks, the signatory organisations reiterate the commitment to free expression as outlined in the European Convention on Human Rights, which include the right to share information or ideas that may “offend, shock or disturb”. Further to this, the Addis-Ababa Declaration for the Recognition of Cartooning as a Fundamental Human Right states “freedom to critique any government or institution is the affirmation of the citizen’s right to scrutinize public affairs.” Press cartoonists form a vital part of the media landscape and we, the undersigned, call on all cartoonists to be protected across Europe.

“During the collective effort required to meet a great crisis it is all too easy to decry humour as inappropriate, even criminal. But satire is synonymous with scrutiny and right now the use of extraordinary power demands it. Cartoonists’ absence would indicate a loss of fundamental freedoms,” said Terry Anderson, Executive Director at Cartoonists Rights Network International.

Institute for Applied Informatics at the University of Leipzig (InfAI)