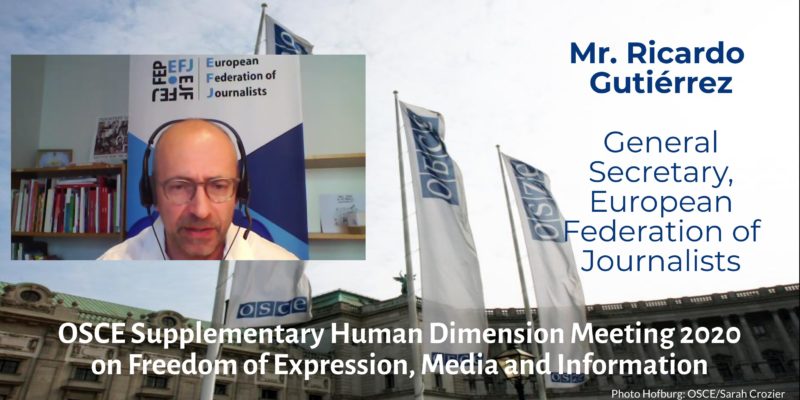 
The European Federation of Journalists (EFJ) was invited today to introduce the working session on freedom of the media at the OSCE 2nd Supplementary Human Dimension Meeting (SHDM). The EFJ called on the OSCE Participating States to fully implement the 2018 Ministerial Council Decision for the safety of journalists.

“Hundreds of media outlets are under threat, starting with local media, which are simply in danger of disappearing for lack of financial support. Tens of thousands of journalists have been put on temporary unemployment. And tens of thousands of independent journalists have been deprived of any income for the past three months,” said the EFJ General Secretary Ricardo Gutiérrez at today’s OSCE SHDM. “This is the great paradox: at a time when the population most needs reliable, verified information, the media ecosystem is no longer able to fulfill its basic mission. Most European governments have not taken the urgent measures needed to ensure the economic viability of the media at this time of crisis. Instead of supporting the media, and thus access to quality information, which is the best antidote against disinformation, most governments have taken measures that restrict press freedom.”

The EFJ and its national affiliates witnessed an unprecedented wave of repression as part of the measures to combat the COVID-19 pandemic:

In total, the EFJ affiliates have reported more than 60 press freedom violations related to anti-pandemic measures in 19 European countries.

Since 1st January this year, the EFJ has also co-signed or submitted 63 alerts concerning 21 European countries to the Council of Europe Platform to Promote the Protection of Journalism:

“As you know, states are supposed to respond to these alerts. Of the 63 alerts co-signed by the EFJ, only 22 – about one third – have been answered by states”, said Ricardo Gutiérrez, calling on again governments in Europe to take effective measures to support all journalists exposed to difficult and often dangerous conditions. “I ask you to check whether the violations I have just listed are in line with the OSCE Ministerial Council Decision on the safety of journalists. I am simply asking yopu to respect your own commitments to protect freedom of the media”.

Read also the opening remarks by the OSCE Representative on Freedom of the Media Mr. Harlem Désir: here.

“Hundreds of media outlets are under threat, starting with local media, in danger of disappearing for lack of financial support. Tens of thousands of journalists on temporary unemployment, or deprived of any income for the past 3 months,” said @Molenews1 at today’s @OSCE #SHDM. pic.twitter.com/FSc85LTIsv

“During the crisis, governments have taken extreme measures, often limiting people’s rights. This is when media are most needed to monitor that governments act in the public interest, & yet journalists were hindered in this function,” said @barbara_trionfi at today’s @OSCE #SHDM. pic.twitter.com/fmvBMYIm5k

In a time when false information and rumours can have such a detrimental impact, including on health, we must stand for media freedom, quality media and the role of journalism in democracy. See my opening remarks during the @OSCE #SHDM today : https://t.co/iTxsKHW4nr