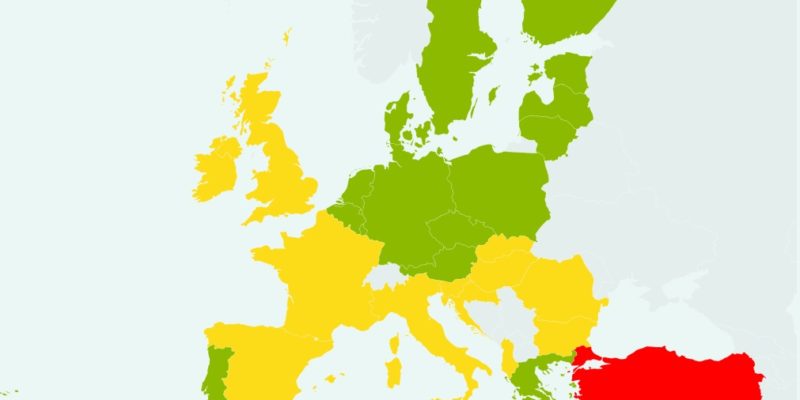 The European University Institute (EUI) has released the new Media Pluralism Monitor (MPM2020). The MPM2020 has been updated for the Digital Age with the addition of many new indicators and variables related to the digital transformation of the news and the media.

The Study confirms the trends observed in the media sector in the past years: journalists are more and more victims of harassment; the sustainability of the news industry is at risk across Europe, while the gatekeeping role of digital platforms is on the rise.

The MPM2020 is a scientific data-driven effort to document the risks to media pluralism in the European Union Member States (UK included) as well as in candidate countries, Turkey, and for the first time Albania, over the years 2018 and 2019, based on a set of 200 variables organised in 20 indicators. None of the countries analysed are free from risks to media pluralism.

The assassinations of Jan Kuciak and Martina Kušnírová in Slovakia, of Lyra McKee in Northern Ireland and of Viktorija Marinova in Bulgaria sadly confirm that Europe is not immune from horrendous crimes against journalists.

“Threats and harassment of journalists are increasingly happening in the online sphere and especially against female journalists, and these may have had a chilling effect on journalists’ freedom of expression and their ability to continue their work unharmed,” said Professor Pier Luigi Parcu, Director of the Centre for Media Pluralism and Media Freedom at the EUI. “Even more worrying is the potential normalisation of threats against journalists from politicians, those who are best placed to foster an enabling environment for journalists,” he added.

This is happening against a backdrop of increasing uncertainty for the economic sustainability of news media, potentially threatening the industry itself and the diversity and pluralism of quality information and news that exists as an essential pillar of democracy. The sustainability of the media sector is further affected by the disruptive role of digital intermediaries that are increasingly draining advertising revenues from the publishing sector.

The analysis provided by the MPM2020 provides a sound basis to inform policy makers, researchers, journalists’ organisations and other stakeholders on the health of the EU media environment.

The Monitor is carried out with the support of a grant awarded by the European Union to the Centre for Media Pluralism and Media Freedom at the Robert Schuman Centre, EUI.

The increase in the risk level for the Journalistic profession standards and protection indicator is due to an increase in attacks and threats to journalists as a consequence of their work, both on- and offline, by the deteriorating working conditions for journalists, by the lack of initiatives on behalf of the state to guarantee an enabling environment for journalists to work without fear.

“This serious deterioration of basic protection for journalists is not acceptable,” said EFJ General Secretary Ricardo Gutiérrez. “The number of countries at risk has doubled! This shows that states are completely failing to meet their obligations in terms of protecting press freedom and the working conditions of journalists. We demand urgent measures from European governments to protect the status of journalists and to ensure that citizens have access to reliable information.”

The sub-indicator on Working conditions scores, on average, an alarming medium risk. Within this indicator, only Belgium, Denmark, Germany and Sweden score as being at low risk, while 13 countries score a medium risk (Austria, Cyprus, the Czech Republic, Estonia, Finland, France, Ireland, Latvia, Luxembourg, Malta, the Netherlands, Poland and Slovakia) and 13 as being at a high risk (Albania, Bulgaria, Croatia, Greece, Hungary, Italy, Lithuania, Portugal, Romania, Slovenia, Spain, Turkey and the United Kingdom). Among the countries that score high risk, Albania, Croatia, Hungary, Romania and Turkey score the highest risk (97%), mainly due to digital disruption and the reduced sustainability of media enterprises.

The results of MPM2020 in the area of Basic Protection confirm the trends of previous MPM implementations, namely a gradual deterioration of principles and pre-conditions of a plural and democratic media system: