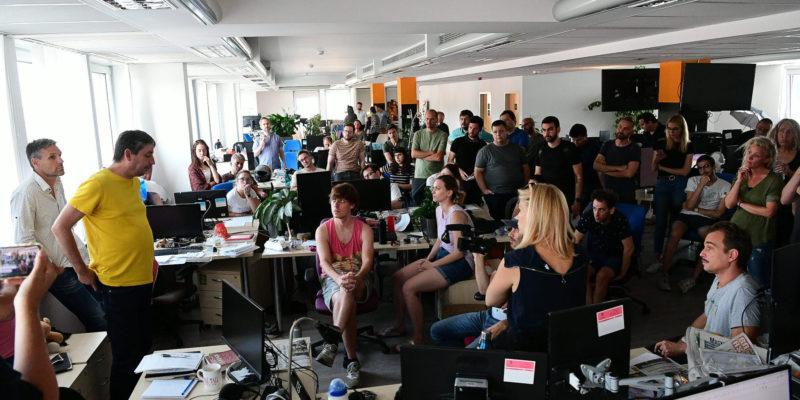 
Thousands of people took to the streets in Budapest on Friday evening to demonstrate against the attacks on Hungary’s biggest independent news portal “Index”. The European Federation of Journalists (EFJ) welcomes this protest march and calls on European leaders to protect media freedom in Hungary.

The editorial board and more than 70 journalists at “Index” have resigned, two days after its editor-in-chief Szabolcs Dull was fired amid claims of political interference.

On Friday, three leading editors and more than 70 others said they were ending their employment there, because board president Laszlo Bodolai had refused to reinstate the chief editor.

The departing journalists published an open letter on the outlet’s website. “The editorial board deemed that the conditions for independent operation are no longer in place and have initiated the termination of their employment,” it said.

The situation at Index comes a few days after Prime Minister Viktor Orbán managed to water down plans by a number of EU countries to link the future disbursal of EU funds to rule of law conditions.

“There is no longer any doubt that fundamental rights are no longer guaranteed in Hungary. The dismantling of media pluralism no longer gives citizens access to independent and verified information. The European Union cannot remain passive in the face of this worrying trend,” said EFJ President Mogens Blicher Bjerregård.

“The EFJ is in full solidarity with Index media workers. We are proud of their reaction. We call on the European Commission and the EU member states to launch an investigation into media ownership and destruction of media pluralism in Hungary. It is high time to take action,” added EFJ General Secretary Ricardo Gutiérrez.

In December 2019, following a joint mission to Hungary, the International Press Institute (IPI), Article 19, the Committee to Protect Journalists (CPJ), the European Centre for Press and Media Freedom (ECPMF), the European Federation of Journalists (EFJ), Free Press Unlimited (FPU) and Reporters Without Borders (RSF) issued a report showing that since 2010, the Hungarian government has systematically dismantled media independence, freedom and pluralism, distorted the media market and divided the journalistic community in the country, achieving a degree of media control unprecedented in an EU member state.