In Hungary EU funds are used to finance pro-government media 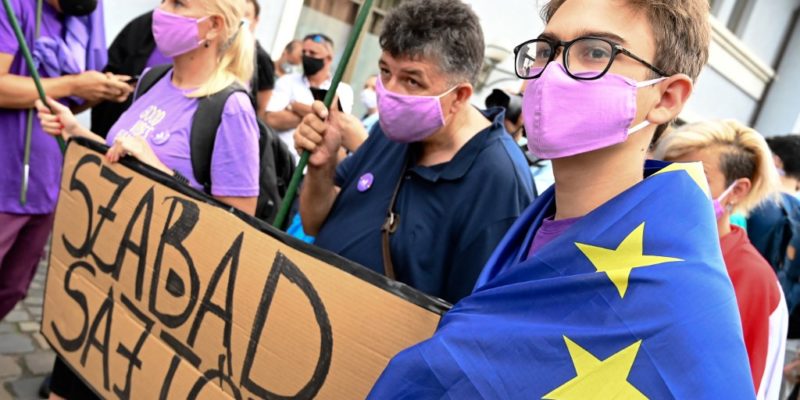 
The political interference at Index, one of the last independent news outlets in Hungary, requires a strong reaction from the leaders of the European Union. The move contravenes the EU Charter of Fundamental Rights, which is a legally binding charter. The EU should feel responsible: issued on Thursday, the EU Media Pluralism Monitor (MPM2020) states that “EU-funds are constantly used to finance pro-government media and spread anti-EU messages” in Hungary. Inaction on behalf of the EU leaders allows Hungarian Prime Minister Viktor Orbán to tighten his authoritarian grip.

Yesterday, the European Federation of Journalists (EFJ) together with its Media Freedom Rapid Response (MFRR) partners called on EU leaders to take action in order to restore media pluralism in Hungary. Today the EFJ insists on the particular responsibility of the EU in the deterioration of press freedom in the country. The MPM Report on Hungary shows that until 2014, the public bureau National Development Office, as the main operator of the EU-funds, was one of the largest state advertiser in Hungary. From 2014 onwards, as the Office was closed down, all the EU-funds are handled and distributed by the Hungarian Government through the Prime Minister’s Office.

“As the Hungarian academic experts who wrote the MPM report note, European subsidies have been used to liquidate press freedom in Hungary. This is intolerable. We once again demand an investigation into the use of these EU funds and the concentration of media ownership in Hungary. We also call for urgent EU funds to be made available to enable the journalists who resigned from Index to launch a new independent media,”said EFJ General Secretary Ricardo Gutiérrez.

“In 2016, the Association of Hungarian Journalists (MÚOSZ) supported the joined complaint from Mérték Média Monitor, a Hungarian media watchdog organisation, the critical radio station Klubrádió and then MEP Jávor Benedek, presented to EU Commissioner for Competition Margrethe Vestager, on  biased market conditions due to the political intervention of the government funding the “public” media channels. In 2019, MÚOSZ also raised a voice against the biased situation of the whole Hungarian media market as a result of government-financed media-conglomerate KESMA. While there were quick responses regarding the Hungarian RTL Club tv-channel, as well as in the case of Google,  so far we have not experienced any substantive reactions to our complaints about these Hungarian cases,’ said MÚOSZ President Miklós Hargitai. “The elimination of Index is just another intervention against media freedom disguised with business interests of the owners”.

The conclusions of the MPM report on Hungary are very clear: “We, and other colleagues addressed our serious concerns many times in the last years not only through the MPM, but in interviews, investigative pieces, informative articles and journal papers. The risks were clearly visible five years ago, and they are crystallized now. What’s happening in Hungary on the media landscape can occur in every other countries. (…) the Hungarian government now can use limitless resources, including regulation, state advertising, the PSM and other hundreds of news outlets, to spread propaganda. One of the main target of the Hungarian government is the European Union for years. (…) EU-funds are constantly used to finance pro-government media and spread anti-EU messages. Within the EU, as a member of the EU, partly funded by the EU. Last year we wrote in the conclusion that the Hungarian media environment poses high risks to media pluralism. It’s more true in 2020 with one amendment. The government’s media machinery now has businesses in London, Slovenia, Macedonia, and has good relationships with alternative news organizations in France, Germany and Italy. Therefore the Hungarian media environment can pose high risks to media pluralism in Europe too.”

The EFJ insists: a Europe-wide threat to media freedom requires an immediate political response from Europe’s political leaders. We are still awaiting answers from European Commission President Ursula von der Leyen and the President of the European Council, Charles Michel.