EFJ and ETUC call for EU sanctions against Belarusian leaders 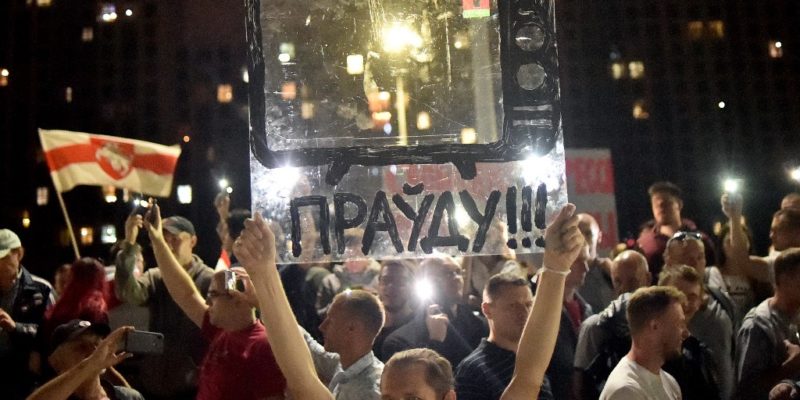 
As announced by the President of the European Council, Charles Michel, EU Heads of State or Government will discuss the situation in Belarus on Wednesday. The European Trade Union Confederation (ETUC) and the European Federation of Journalists (EFJ) again call on the EU Council to reintroduce commensurate sanctions for electoral fraud and violence against protesters and journalists in Belarus.

The EFJ believes the EU must swiftly impose the sanctions it has threatened on individuals in the Lukashenko administration (including state media) and on Belarusian security forces complicit in the crackdown.

Together with the ETUC and the Pan-European Regional Council (PERC), the EFJ also urges the European Union to reconsider cooperation with Belarus, including within the Eastern Partnership. “Strengthening support to Belarusian civil society – including independent unions – and stopping any EU financial support to the government and state-controlled projects – including through multilateral development banks – must also be urgently addressed,” says the ETUC General Secretary Luca Visentini in a letter sent yesterday to the Presidents of the European Commission, European Council and European Parliament, Presidents von der Leyen, Michel and Sassoli.

The ETUC supports the increasing number of labour strikes that are already taking place in major state companies, including state media. The ETUC also supports demands to release everyone who was placed in isolation wards and prisons from 9th of August onwards for political reasons and denounce any retaliation, including dismissals, for joining peaceful protests.

According to the Belarussian Association of Journalists (BAJ), the EFJ affiliate in Belarus, two journalists are still detained in Belarus. Since 9th of August, 69 journalists have been detained. 36 of them were beaten or injured.

“We demand the immediate release of the detained journalists,” said EFJ General Secretary Ricardo Gutiérrez. “And we call on the European Council to impose the strictest sanctions on those responsible for and complicit in the repression of journalists.The management of state propaganda media must not be spared. Threats by the head of state television BTRC Ivan Eismant against strikers cannot go unpunished.”