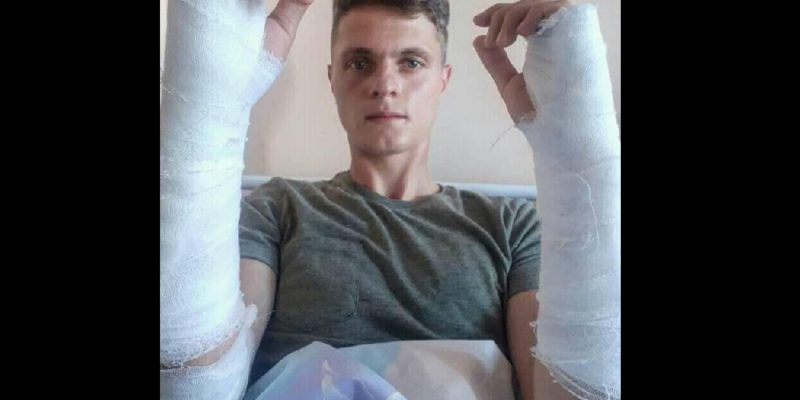 The journalists from Grodno claim to have dozens of testimonies of illegal detentions, use of physical force, destruction of civilian vehicles, illegal restriction of movement of people, violence against people during detentions and detention.

Journalist Ruslan Kulevich (our picture) was arrested on the evening of 11 August while covering the demonstrations in Grodno for the online media Hrodna.life. The police beat him and broke both his forearms. He was released without explanation on the evening of 13 August. The medical report from his assault indicates that he’s suffering from “concussion, bruise of the soft tissues of the zygomatic region on the left, hemorrhage of the upper eyelid on the left, closed fracture of the styloid process of the right ulna, closed fracture of the head and hooked bone of the left hand, closed fracture of the base of the 3rd metacarpal bone of the left hand, chest contusion and bruising.”

Journalists demand to provide them with information about the exact number and names of all those detained during the peaceful protests. They also demand to be informed about the ongoing prosecutions and the current location of detained people. In addition, they ask the Belarusian authorities to provide information on the units that were involved in the detention, and transportation of people, as well as the names and titles of the heads of the special operation to detain people in Grodno.

Grodno journalists also demanded information about the actions already taken and planned to investigate the facts of illegal detention and physical violence against members of the media and other civilians.

The statement was signed by about two dozen journalists from Grodno.