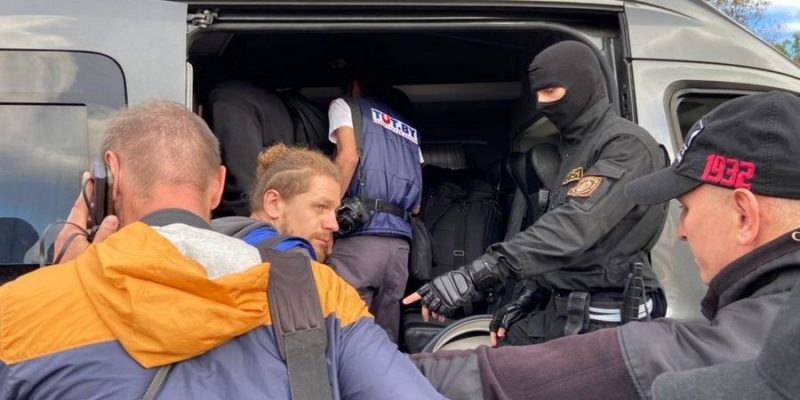 
The Belarusian Association of Journalists (BAJ) on Friday demanded the opening of a criminal investigation against those who detained at least 47 journalists on Thursday 27 August to prevent them from covering the protests against disputed President Lukashenko in Belarus. The European Federation of Journalists (EFJ) fully supports the legal proceedings initiated by its affiliate BAJ.

The legal action is launched on the basis of article 198 of the Criminal Code of the Republic of Belarus (“Obstruction of the legitimate professional activities of a journalist”). BAJ asked the chairman of the Investigative Committee of the Republic of Belarus to initiate a criminal case into the events of 27 August, when at least 47 journalists were detained in order to prevent them from covering the massive demonstrations against electoral fraud and police violence in Minsk and Brest.

Most of the detainees were taken to the Oktyabrskiy district police department of Minsk. Police officers randomly destroyed the images taken by the journalists. They also threatened to damage or destroy journalists’ professional equipment.

“Such arbitrary detentions and threats constitute an obstacle to the legitimate professional activities of journalists,” said EFJ Director Renate Schroeder. BAJ alleges not only a violation of the criminal code by law enforcement officials, but also a violation of the Belarusian Media Law and the International Covenant on Civil and Political Rights.

The EFJ joins BAJ in its demand:

“We call again on the European Union, the Council of Europe and the OSCE to take action,” said EFJ General Secretary Ricardo Gutiérrez. “The EFJ joined the call yesterday by the European Trade Union Confederation (ETUC) to the European Parliament for an urgent resolution calling for re-run of the election with an independent election commission and international observers.”

The European trade union movement urges the European Union to assess the Belarusian government’s actions and review the EU relations with Belarus. “This includes the reintroduction of commensurate sanctions for electoral fraud and violence as well as reconsidering cooperation with the country, including within the Eastern Partnership. Strengthening support to Belarusian civil society – including independent unions – and stopping any EU financial support to the government and state-controlled projects – including through multilateral development banks – must also be urgently addressed.”

The ETUC calls on the European Parliament to adopt a Resolution including the above mentioned demands and measures during the September Plenary session.