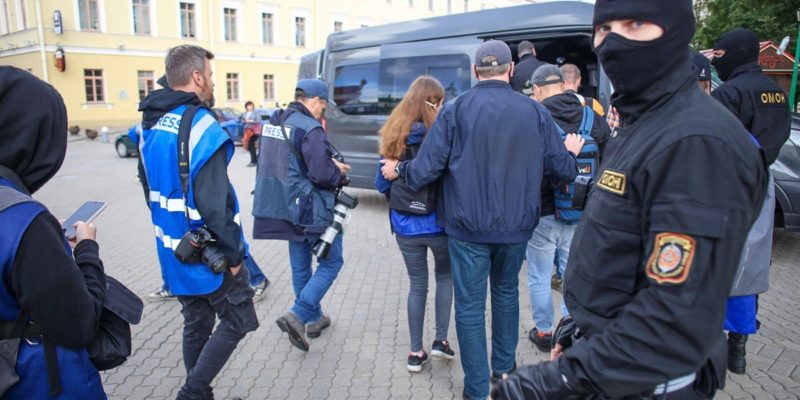 
Belarusian police detained 47 local and international journalists preparing to cover protests in Minsk and Brest, on Thursday. The police confiscated their telephones and identity documents. The European Federation of Journalists (EFJ) considers these arbitrary detentions as another act of censorship by the Belarusian authorities.

Most of these journalists had planned to cover a demonstration in which hundreds of anti-government protesters marched in central Minsk on Thursday evening.

The Belarusian Association of Journalists (BAJ) has drawn up a list of arbitrarily detained journalists, on Thursday, in Minsk and Brest:

“These so-called accreditation checks are just a pretext to prevent journalists from covering the massive demonstrations against electoral fraud and police violence,” said EFJ President Mogens Blicher Bjerregård. “It is high time for the international community to react. An OSCE mission to Belarus is urgently needed. We call again on the OSCE participating states to activate the so-called Moscow Mechanism in order to allow the sending of this international mission.”

The moment when @RFERL cameraman Andrey Rabchyk was detained. He was livestreaming from the protests – and then the video disappeared. Just a moment ago, BBC, DW, https://t.co/Wjwv7E03nd, https://t.co/dhdTZENdKr and other local and international journalists have been detained pic.twitter.com/aoXGFCTGHF