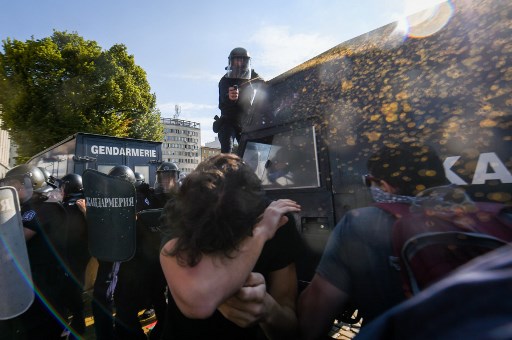 Several journalists were injured during clashes between police and demonstrators on 2 September in Sofia, Bulgaria. The European and International Federations of Journalists (EFJ) join their affiliates in Bulgaria, the Union of Bulgarian Journalists (UBJ), in condemning the police violence against journalists and protestors.

The incidents took place during anti-government and anti-corruption protests in Bulgaria which escalated when the Parliament re-opened after the summer break in a new venue with the aim to limit journalists’ access. Police responded with pepper spray and gas against protestors and journalists covering the events.

It was also reported that journalist Dimitar Kenarov was kicked in the head by police officers who also damaged his camera. He was held on the sidewalk although he repeatedly identified himself as a reporter. Nikolay Doychinov, Sofia-based photojournalist for Agence France Presse was hit in the back with sticks and officers damaged his camera too.

The Union of Bulgarian Journalists recorded similar incidents involving other journalists and publicly condemned the violent attacks. ”We insist that public order be guaranteed by those responsible for maintaining it, whose duties include strict respect for democracy, the rule of law and the security of the citizens. This also implies ensuring the right of journalists to carry out their public work without risk to their health and life or to freedom of expression,” said Managing Board President Snezhana Todorova.