EFJ calls on Council of Europe to support Belarusian journalists 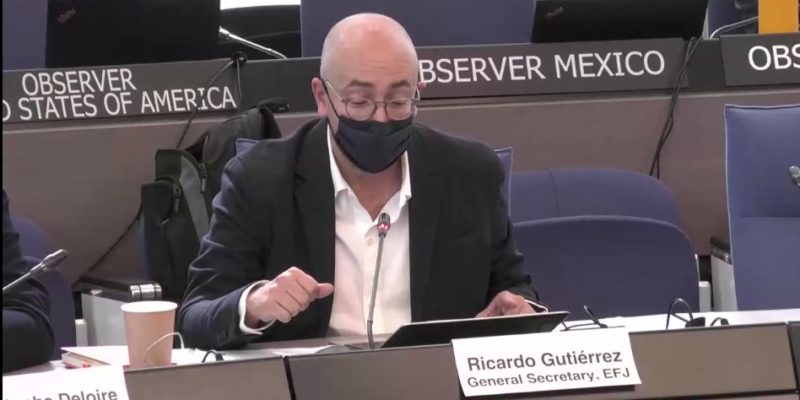 
The European Federation of Journalists (EFJ) on Tuesday called on the member states of the Council of Europe to put an end to the repression of journalists in Belarus. 159 journalists have been detained since the fraudulent elections of 9 August.

The EFJ General Secretary Ricardo Gutiérrez, who was invited to speak on press freedom by the Committee of Ministers of the Council of Europe on Tuesday in Strasbourg, called on the 47 member states of the Council of Europe to take concrete actions to end the repression of journalists in Belarus. He recalled that according to the monitoring of the Belarusian Association of Journalists (BAJ), 159 journalists have been arbitrarily detained since the fraudulent presidential elections of 9 August.

Ricardo Gutiérrez regretted that the OSCE has not yet agreed to send an expert mission to Belarus to observe the numerous human rights violations. He also denounced the wait-and-see attitude of the European Union, which has still not taken any sanctions against those responsible for electoral fraud and police violence.

The Secretary General of the Council of Europe, Marija Pejčinović Burić, said on Tuesday that she was gravely concerned about human rights violations in Belarus: “I call on the leadership of Belarus to put an end to these repressive developments. There is no other way than to engage in fair and open dialogue with the civil society in view of preparing and conducting necessary reforms with no delay.”

During Tuesday’s debate in the Committee of Ministers, the ambassadors of Denmark, Germany, Belgium, Finland, Estonia and the United Kingdom expressed their deepest concerns about the situation in Belarus.

“I am delighted with these signs of support,” reacted the EFJ GS. “I call on these States and all those who are concerned about the rule of law in Belarus to take concrete action. A coalition of ten OSCE participating states would be enough to trigger the so-called “Moscow Mechanism” and send an urgent expert mission to Minsk. It is high time to take action!”

Timely and important meeting on freedom of media and safety of journalists. Need for support to journalists and civil society in #Belarus stressed. Strong statements by ⁦@cdeloire⁩ and Secretary General Gutierrez ⁦@EFJEUROPE⁩. pic.twitter.com/8cLLHlBBIK

In the aftermath to the #CharlieHebdo attacks, @coe
Committee of Minsters adopted 2016 Recommendation on protection of journalism & safety of journalists, the fundamental, ambitious, text; we need to be ambitious again, says @EFJEUROPE Ricardo Gutierrez.#EuropeForFreeMedia pic.twitter.com/clMlqPRNtK