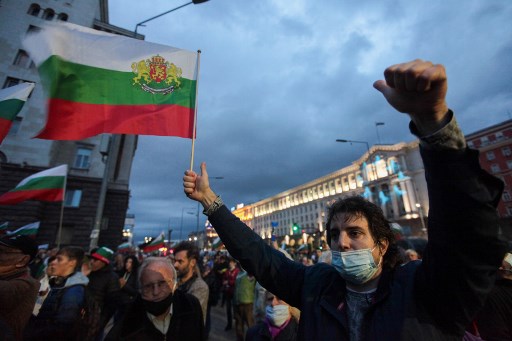 
Together with partner organisations, the European Federation of Journalists (EFJ) signed a letter to shed light on the repeated cases of police violence and intimidation against journalists in Bulgaria as well as the restrictions for the press to engage with lawmakers in the new headquarters of the Bulgarian National Assembly.

The letter reads as follows:

We, the undersigned partners of the Media Freedom Rapid Response (MFRR), are writing to express our serious concern about reports of police violence and intimidation against journalists and media workers reporting on recent protests in Sofia and a new restrictive system for press access inside the new Bulgarian Parliament building.

On 2 September, the Bulgarian National Assembly was moved to a new location in the former headquarters of the Bulgarian Communist Party. While the former building enabled journalists and media workers to mingle and engage with MPs and their guests in all common spaces, the new building’s layout restricts access of journalists to politicians and thereby limits opportunities for them to engage meaningfully with lawmakers.

According to media reports and veteran parliamentary journalists, reporters are consigned to working in the basement and can only see and ask questions of MPs and ministers at specially convened press conferences or outside the building. This significantly reduces their ability to ask critical questions and adds additional barriers to their work. Meanwhile, journalists are now only able to observe parliamentary proceedings on a live TV screen from the basement. We note that more than 60 journalists, media workers and camera operators from outlets including BNT, BNR, BTA, Dnevnik, OFFNews, Mediapool, ClubZ, Sega, 24 Chasa, Capital, Focus, News.bg, Dir.bg, BGNES have signed a petition to condemn this development.

In response, Parliament Speaker Tsveta Karayancheva has publicly stated that she has no intention of reconsidering the decision. The justification given has been to move Bulgaria more in line with European parliaments and to allow journalists to contact MPs through the individual parties. In light of the concerns raised by Bulgarian media, the members of the MFRR urge you to reconsider this decision and respect the previous system of free movement of the press that has existed within the Bulgarian National Assembly for the last three decades.

We note also that this separation of MPs from the media within the building comes against the backdrop of widespread protests against corruption. Adding additional barriers between MPs and those whose job it is to hold them to account undermines the public’s confidence in the government’s readiness to tackle corruption and further restricts journalists’ access to information, while simultaneously limiting transparency in the Bulgarian political system. We therefore call on Ms Karayancheva to reverse the restrictive rules and implement a system of exemption for accredited journalists and media workers. The changes would not be difficult to enact and would act as an important symbol of the openness of the Bulgarian parliament as a democratic institution.

Moreover, we note these restrictions are introduced on the back of a string of incidents involving alleged police violence and heavy-handed tactics against journalists and media workers covering protests in Sofia. According to an alert posted on the Mapping Media Freedom (MMF) platform, on the night of 2 September, freelance journalist Dimiter Kenarov was detained and allegedly kicked in the head by at least two riot police officers during anti-corruption protests. It was also reported that on the same day, police officers also hit Nikolay Doychinov, a photojournalist for Agence France-Presse, in the back with batons. Several other journalists and television crews, including staff from bTV, also required medical attention after they were fired at with pepper spray.

The members of the MFRR support the call by MEPs of the European Union’s Working Group on Media urging Bulgaria’s Interior Minister, Hristo Terziyski, to immediately open a full, thorough, and impartial investigation into these allegations and hold those officers responsible to account. Police officers are not above the law and a full investigation is necessary to ensure the rule of law in Bulgaria is maintained.

Sadly however, journalists questioning authorities about such issues of alleged police brutality are being met with intimidation rather than answers. On 14 September, police in Sofia summoned Martin Georgiev, a reporter at Sega, and questioned him over inquiries and images he had sent to the Ministry of Interior detailing allegations of police violence against protesters. He was interrogated for half an hour without a lawyer present. We condemn this interrogation and note this kind of behaviour by police only further intimidates journalists reporting in the public interest.

Taken together, these incidents both undermine the ability of the media to do their job in reporting from the scene of protests without fearing for their safety and liberty, and threaten the public’s right to information by restricting media access to MPs. Bulgarian authorities must take immediate action to remedy these situations.

We thank you for your consideration and look forward to seeing your response.