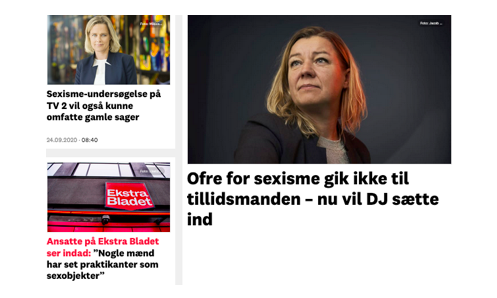 “A big TV cannon comes over to me and tells me that if I do not suck his cock, then he will ruin my career. I said no.” It is the 26th of August, TV presenter Sofie Linde is hosting the Zulu Comedy Gala in Copenhagen, and with these words she just started the #MeToo movement in Denmark.

The statement came as a bombshell in the country. In response, as a sign of solidarity, 701 female journalists and media workers signed a letter in which they denounced a culture of sexism: “You are right. We experienced it too,” they said in their address to Sofie Linde, who just spoke up about her experience with sexual harassment early in her career at the public Danish television (DR). The next day the letter was signed by 1600 female journalists, before reaching other workplaces, such as restaurants, hospitals and parliament.

“We’ve all experienced it to a greater or lesser degree over the course of our careers: inappropriate remarks on our appearance or clothing; suggestive messages; physical behaviour that crosses the line. Warnings that there are a few men we should avoid at the Christmas party. It happened before. It’s still happening.”

The Danish Union of Journalists (DJ) have become aware of the scale of the problem. According to a survey carried out by the union in 2018 among its members, over 10% of journalists reported harassment in a work context, with women and freelancers being the most vulnerable.

“Many of us knew, but now it is clear that sexism is a huge problem in our profession as in many other professions. What has happened is a game-changer, that we will use to get rid of the old culture and create a new and healthy environment, a new culture in our media. Now we agree that the problem is there – it needs to be backed up with some action,” says DJ president Tine Johansen.

Following the survey, DJ published a policy with guidelines on how to tackle sexism in the newsrooms. But the few results shows that more needs to be done. It turned out that too few members have approached their leader or shop steward on such matters. The union just announced that staff and shop stewards will now be trained, not only to be able to raise awareness and solve future problems, but also to be more proactive for their members.