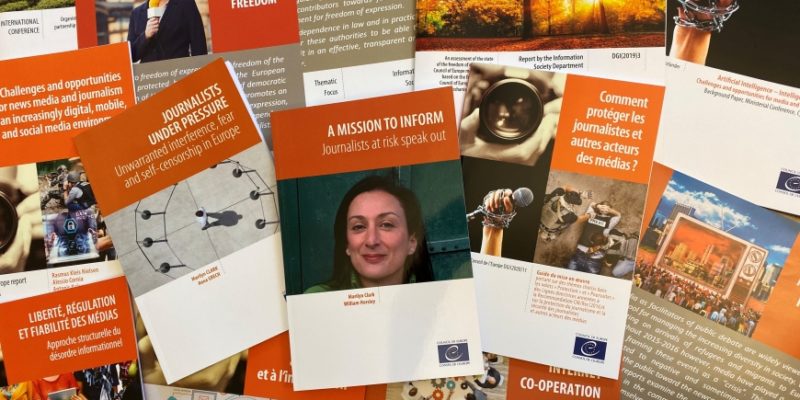 Undue pressures and harassment against journalists – often leading the limitation or even the suppression of the dissemination of public interest information and self-censorship – are still occurring among journalists in Europe, says a new book titled “A mission to inform: journalists at risk speak out” published today by the Council of Europe.

This book is a unique exploration of the intimidation of journalists across Europe and it provides an invaluable resource to everyone concerned with the protection of journalists, including government authorities and media practitioners.

Co-authored by Prof Marilyn Clark and William Horsley, the book complements the 2017 Study “Journalists under pressure. Unwarranted interference, fear and self-censorship in Europe”. While the 2017 Study was based on a survey with 940 journalists from across Council of Europe member states, the book “A mission to inform: journalists at risk speak out” is based on interviews with a handful of journalists who discussed into depth the forms of pressure they have been subjected to due to their work and the way they found resilience to carry on in their “mission to inform”.

“Journalists are constantly at risk of undue pressures and intimidation from those who feel threatened by their work,” writes Christos Giakoumopoulos, Director General of Human Rights and Rule of Law of the Council of Europe, in the preface to the book. “All across Council of Europe member states, they may encounter police intimidation and legal harassment; smear campaigns and bullying offline, but more recently predominantly online; pressures from political actors and editors; and economic pressures exerted by media owners and sponsors. Journalists also face detention, threats and physical violence. (…) Strong action is required to reverse this deterioration of freedom of expression in Europe, at domestic and international level.”

The journalists were selected for their experience and skill in reporting in the public interest and exposing injustice and abuses. Each of these journalists shared their insights into the realities of doing cutting-edge journalism to bring the truth to light; they spoke about their first-hand experience of threats, hostility and intimidation, surveillance and cyberattacks, and about self-censorship, resilience and coping strategies, as well as about what they portray as routine failures by state authorities to give journalists the protection they need to fulfil their public watchdog role.

Based on the data analysed, this book calls for effective measures to protect the safety of journalists at risk, prosecute the perpetrators of attacks and create genuinely favourable environments for free, independent and diverse media. The forward-looking measures outlined include legal and regulatory reforms; effective measures of protection; improved oversight and reporting mechanisms to guard against threats; public media literacy programmes; and additional support through professional training and psychosocial support where needed.

During the launch event of the book today, the EFJ General Secretary Ricardo Gutiérrez, who is a member of the working group that was set up to advise and fulfil the objectives of this study, called on States to take the prevailing culture of impunity more seriously. He recalled that there are still 36 unsolved cases of murders and disappearances of journalists in Europe.

In a democracy it is crucial that the citizens have the right to know (the truth). Journalists’ duty is to seek the truth & make sure that we're informed. That's why @coe we've the obligation to protect them & ensure their right to do their work without restrictions #pressfreedom pic.twitter.com/4HJ9e2mh0i

"Thank you for being stoger than those who want to scare and harass you. Through your work, relentless search for justice and accountability, you're serving the public good. You're demanding justice and human rights for all of us." says @Dunja_Mijatovic to journalists.#journosafe pic.twitter.com/3XOOD3h2jI