Ukraine: Arson of regional media’s editorial office at the height of election campaign 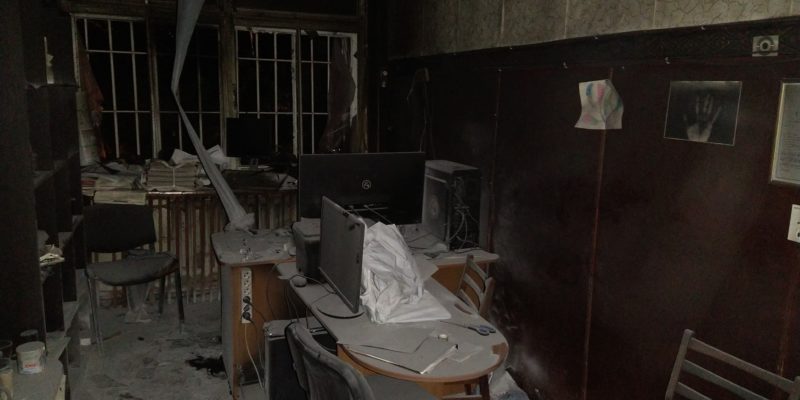 On the night of 21 October, the editorial office of the regional media Alternatyva.org was burned down in the Odesa Oblast region. The National Union of Journalists of Ukraine (NUJU) reported the incident, referring to information from Roman Varshanidze, the editor-in-chief of the publication. The journalist informed that according to witnesses, two unknown persons broke the editorial office window and threw a bottle with Molotov cocktail in it.

As a result, the furniture and floor were burnt, but the editorial office and equipment were saved by the neighbours who were able to put out the flames before the firefighters arrived.

This is the second attack committed against this independent local media in a week. On Saturday, 17 October, Roman Varshanidze was beaten by three unknown persons during filming, leaving him with bruises and a concussion.

Sergiy Tomilenko, the President of the NUJU said: “On the eve of the local elections, the beating of an independent journalist and the arson of his editorial office are acts of intimidation of journalists not only in Odesa region, but throughout Ukraine. Law enforcement must make appropriate efforts to solve these crimes and secure media workers during this election time.”

Roman Varshanidze has been targeted for years for his journalistic activities. In 2017, he was severely beaten in Ovidiopol. To date, no one was punished for this attack. The consideration of the case is delayed in court.

The EFJ General Secretary Ricardo Gutiérrez, who visited the editorial staff of Alternatyva.org in 2017, stressed that no progress has been made in three years to end impunity for crime against journalists:

“I express my personal support for Roman and the media he works for. These recent attacks are the result of systematic impunity for crimes against journalists. It is unacceptable that this case, which has been denounced by the Ukrainian and international journalistic community since 2017, has not yet been investigated. I call on Ukrainian law enforcement authorities to effectively investigate into these attacks.”