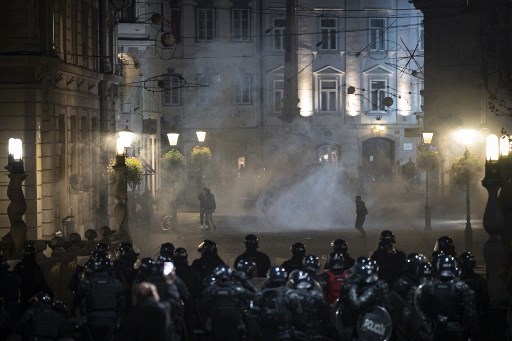 Several journalists were targeted by protestors during a violent protest organised on 5 November by the cyber activist group Anonymous Slovenia, in Ljubljana. Interior Minister Aleš Hojs partly blamed the media for the outburst of violence. The European Federation of Journalists (EFJ) joined its affiliate in Slovenia (DNS) in condemning in the strongest terms this new verbal attack and the protestors’ violence against journalists reporting on the ground.

According to Slovenian media, demonstrators were coronavirus-deniers, conspiracy theory groups and anti-government protesters. There were several hundreds of people.

The Interior Minister Hojs claimed that the media had been “supporting” the protests for months, referring to the “Friday bicycle protests” that started mid-March as a reaction to right-wing politician Janez Sanša becoming Prime Minister again. “You’ve supported and fed them for months… and now here you have wounded police officers,” he told a reporter of POP TV. However, bicycle protestors  had distanced themselves from the Anonymous rally due to the expected use of violence.

Several media outlets reported that their news crews had been shoved around, while photographer Borut Živulovič had to seek medical aid at the emergency department following a strike in the head.

“We reiterate that any violence is unacceptable and that such a situation cannot become a normal professional risk in the work of journalists, photojournalists and cameramen who carry out their basic mission in the field – collecting and disseminating information to the public who deserves to be informed,” says the Slovenian Journalists’ Association (DNS). DNS further condemned the Interior Minister Hojs’ statement:

“The government of Janez Jansa has been trying for some time to blame the epidemic and everything bad in this country on the media, and the minister’s statement is just another attempt in this direction.”

EFJ General Secretary Ricardo Gutiérrez said: “We strongly condemn the attacks on media workers and express solidarity with them. It is very worrisome to see that Slovenian politicians are greatly contributing to the increasing hostility and hatred towards journalists. We call on Slovenian officials to immediately stop intimidating and discrediting media workers.”