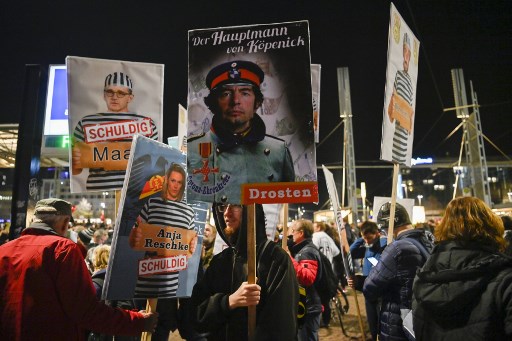 
At least, 43 journalists were prevented from carrying out their work by protesters and police officers at the “Querdenken” demonstration in the eastern German city of Leipzig on Saturday, 7 November. The European Federation of Journalists (EFJ) and European Centre for Press and Media Freedom (ECPMF) strongly condemn the violence and call again on the German police to do its utmost to protect journalists covering demonstrations.

The demonstration was attended by around 20,000 protesters according to German media – including people criticising the Government’s response to the COVID-19 pandemic, as well as people from far-right parties including extremist National Democratic Party of Germany (NPD). Many were not wearing face masks and flaunted social distancing rules. As the protest was stopped by the police due to the unexpected number of participants, a number of protesters clashed with police, which also involved targeting journalists on assignment.

Journalists were abused and prevented from carrying out their work. Many were repeatedly threatened with violence, while others were chased and physically attacked. Protesters tried to grab microphones, cameras and other pieces of equipment. On several occasions, the police did not intervene or even impeded journalistic work.

In one case, officers threatened to arrest a journalist, withholding his press card and saying he would make “sure [the journalist] would not get a new one”.

It was reported that the police complained about the presence of the press and threatened to use force against journalists if they would not go away as they were clearing Augustusplatz, stating that “We do not differentiate between protesters and journalists”.

Further to this, video footage showing police officers recording names and dates of birth of a number of journalists – allegedly for filming with telephoto lenses – was shared on social media. Journalists were also told to stop taking portraits as this would “provoke the participants of the Querdenken demonstration”.

The German journalists’ association DJV federal chairperson Frank Überall considered that the interior ministers had failed to inform the police offices (from a number of German states) about the rights of journalists and the need to protect press freedom as a fundamental right: “The task of the police is to protect freedom of the press and journalists – especially when targeted by Nazis and Covid deniers.”

Although violence against journalists has been seen in a number of similar protests across Germany, union dju in ver.di chairperson Tina Groll stated that in this protest, the phenomenon had reached a new dynamic and magnitude: “This is a dangerous development for democracy and an alarm signal for those who are politically responsible. It must be ensured that journalists can report on demonstrations like the one in Leipzig without fear and being unhindered”. She also stated that a number of press representatives had reached out to the union, stating that they decided not to report from the demonstration due to security concerns.

EFJ and ECPMF will continue to monitor all the violations on Mapping Media Freedom and provide support to journalists in need. Both organisations reiterate their call for protection of all journalists when covering demonstrations and demand the investigation of all threats and attacks.

This statement has been coordinated by the European Federation of Journalists (EFJ) and European Centre for Press and Media Freedom (ECPMF) as part of the Media Freedom Rapid Response (MFRR), which tracks, monitors and responds to violations of press and media freedom in EU Member States and Candidate Countries. This project provides legal and practical support, public advocacy and information to protect journalists and media workers. The MFRR is organised by an consortium led by the European Centre for Press and Media Freedom (ECPMF) including ARTICLE 19, the European Federation of Journalists (EFJ), Free Press Unlimited (FPU), the Institute for Applied Informatics at the University of Leipzig (InfAI), International Press Institute (IPI) and CCI/Osservatorio Balcani e Caucaso Transeuropa (OBCT). The project is co-funded by the European Commission. www.mfrr.eu