France: bill on security will prohibit dissemination of images of police 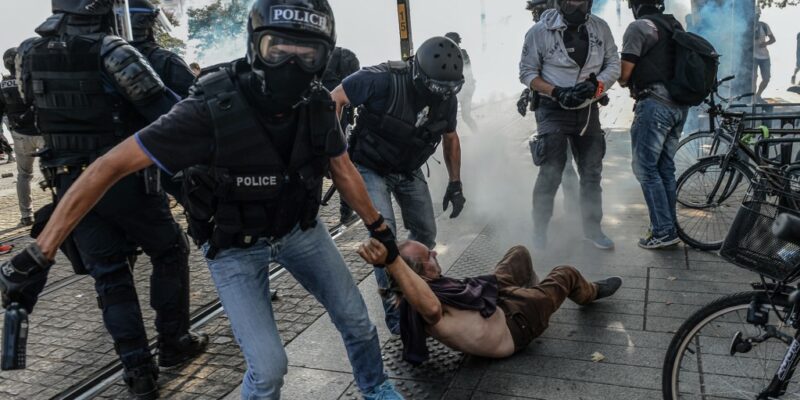 
The European Centre for Press and Media Freedom (ECPMF) and European Federation of Journalists (EFJ), as part of the Media Freedom Rapid Response (MFRR), with French unions SNJ, SNJ-CGT, CFDT-Journalistes, are concerned about a legislative proposal currently pending in the French parliament, which would make it illegal to disseminate images of law enforcement officers of the national police and gendarmerie. We call on the members of Parliament to delete the proposed text.

Legislative proposal No. 3452 on global security was introduced by Members of Parliament of the presidential majority on 20 October 2020. The text proposes a host of legislative changes that purport to address the “new challenges for French security” and strengthen law enforcement to this end. In article 24, the legislative proposal advances the amendment of the 1881 law on press freedom, to add a provision (new Art. 35 quinquies) that would make it punishable by one year of imprisonment and a fine of 45 000 euro to disseminate, with the intent of causing psychological or physical harm, an image of the face or any other element that could identify a law enforcement officer in the course of exercising his or her duty.

As is set out in the Press Freedom Police Codex based on case-law of the European Court of Human Rights, “journalists should have the right to identify individual police staff and to document and report on the work of the police forces.” As such, we reiterate the concern previously expressed by the general assembly of the European Federation of Journalists and the journalists’ union SNJ, SNJ-CGT that this provision will impede journalists and media workers from doing their job. In this regard, the provision’s inclusion of a required intent to cause harm is not a sufficient safeguard. First, it does not prevent the prosecutor from bringing cases where the intent of the journalist is unknown, leaving it to the court to decide that matter. As the case progresses, the affected journalist has to deal with the cost and stress of being the defendant in a criminal lawsuit. Second, it establishes an insignificant barrier to bring actions when police and gendarmerie officers could easily argue that they were psychologically affected by the dissemination of their image by a journalist, creating the possibility that the intent might be established in court. Overall, this lack of adequate safeguards risks creating an avenue for gag lawsuits.

This latest legislative proposal is one of many attempts to significantly restrict the space within which journalists can operate. In September, Gérald Darmanin, Minister of the Interior, presented the National Policing Plan intended for police and gendarmes. In particular, the document discriminates between journalists “holders of a press card and accredited to the authorities” and others, even though the exercise of the profession of journalist, as defined in the French Labour Code, does not require the possession of a press card. Further, the proposal also states that the offence consisting of remaining in a crowd after having been warned to disperse by the police does not include any exceptions for journalists.

Further, there have also been a number of examples of police officers themselves threatening journalists and media workers during their work. This includes, among many others, the injuring of freelance journalist Stéphanie Roy after she was hit by a grenade thrown by police officers while covering a protest in Paris for press agency Line Presse, the unwarranted arrest of journalists at two separate environmental protests at Roissy-Charles de Gaulle airport, Orly airport as well as at Annecy Meythet airport where two journalists were questioned by police for covering Extinction Rebellion actions and in 2019, the arrest of two journalism students from the Higher School of Journalism (ESJ). The school itself stated that “the evidence in our possession leads us to believe that they were arrested for taking pictures of police officers in action.” SNJ has identified almost 200 journalists prevented from exercising their profession in the last two years and numerous alerts have been posted on the Council of Europe’s Platform to promote the protection of journalism and the safety of journalists. That same year, the Independent Union of Police Commissioners (Syndicat Indépendant des Commissaires de Police – SICP) posted a message on Twitter naming five French journalists as “the main actors” in the “fight against National Police” in France. These examples illustrate an erosion of trust and demonisation of media actors that we fear will only be reinforced if this legislative proposal is adopted.

This statement is part of the Media Freedom Rapid Response (MFRR), which tracks, monitors and responds to violations of press and media freedom in EU Member States and Candidate Countries. This project provides legal and practical support, public advocacy and information to protect journalists and media workers. The MFRR is organised by an consortium led by the European Centre for Press and Media Freedom (ECPMF) including ARTICLE 19, the European Federation of Journalists (EFJ), Free Press Unlimited (FPU), the Institute for Applied Informatics at the University of Leipzig (InfAI), International Press Institute (IPI) and CCI/Osservatorio Balcani e Caucaso Transeuropa (OBCT). The project is co-funded by the European Commission. www.mfrr.eu