EFJ calls on all journalists’ organisations to support Assange 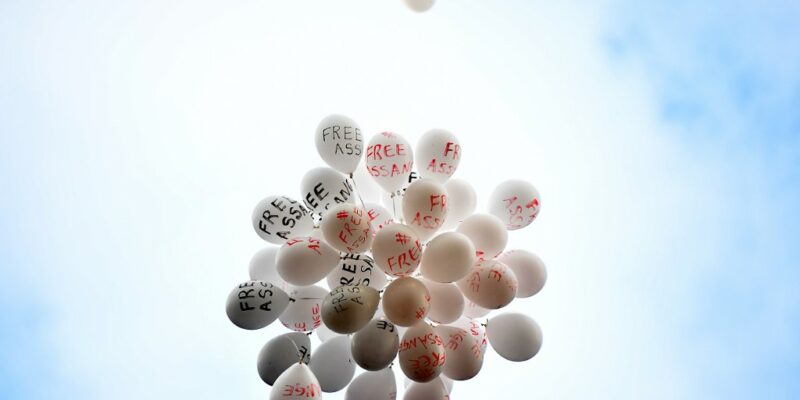 The European Federation of Journalists (EFJ) joins its affiliate in the UK, the National Union of Journalists (NUJ), in condemning the detention of Julian Assange pending his extradition proceedings. We call on journalists’ organisations in Europe to support the NUJ’s DEA campaign to draw to broad attention concern about the implications of this lawsuit for free speech.

The EFJ joins the NUJ in further condemning the attempted use of the US Espionage Act to prosecute Assange for his work exposing the war crimes committed by US service personnel in the Iraq and Afghan war logs. The Espionage Act has also been used in the past to jail trade unionists and criminalise the activities of those who wish to report on the incompetence, corruption and illegality of the powerful.

The EFJ calls on all Journalists’ trade unions and associations to support the DEA campaign and to oppose the persecution of Julian Assange.

You can read the NUJ letter to trade unions here.

In the UK, some of the biggest unions (Unite, the NEU, Aslef…) have come out in support of the DEA campaign.

Below we publish an article by our NUJ colleague Tim Dawson, who has been following the trial hearings, on why journalists should feel concerned about these lawsuits.

Julian Assange’s extradition hearing took its last evidence at the Old Bailey, London. Closing submissions will be made in writing and Judge Baraitser‘s ruling will be handed down on 4 January at The Old Bailey.

Until 23 May 2019 journalists quite reasonably held opinions about Julian Assange and his legal tussles that were every bit as multitudinous as those of the public at large.

These might include the view that he is an irresponsible narcissist; that he is tainted by the Swedish sexual assault allegations; or, that he is a seer whose revelations have unmasked the shocking truths of modern warfare.

By the middle of spring last year, the Metropolitan Police had arrested Assange and he had been jailed for skipping bail in 2012. The US government had requested his extradition on a single charge of computer hacking. If convicted, he might serve five years in prison.

Then in May last year, in the upmarket Washington suburb of Alexandria, Virginia, the pursuit of Julian Assange took a new and deeply troubling twist. A grand jury returned a second, superseding indictment that included 18 charges, 17 of them for violations of the Espionage Act.

Assange himself now faced a potential sentence with a release date more than a century beyond his most optimistic lifespan. It was in the detail of the charges, however, that a critical juncture for media freedom stood out.

The indictment includes charges that Assange had: “unlawfully obtaining and disclosed classified documents related to the national defense”; “actively solicited United States classified information, including by publishing a list of ‘Most Wanted Leaks’ that sought, among other things, classified documents”; “engaged in real-time discussions regarding (Chelsea) Manning’s transmission of classified records”; and, “actively encouraged Manning to provide more information and agreed to crack a password”.

What this amounts to is cultivating a source to provide information – the most basic and universal journalistic activity. Jameel Jaffer, professor of Law and Journalism at Columbia University, put it bluntly in his evidence to Assange’s extradition hearing. “The indictment is mainly a description of Mr Assange engaging in core journalistic activities. These are activities that the government’s apparent theory of liability would criminalise”.

Whether or not you consider Assange a journalist, as some had agonised over, is rendered irrelevant. He is being prosecuted for activities that a great many journalists undertake every day of their working lives.

Nor is concern about such a precedent merely rhetorical. Following the ‘9/11’ attack in 2001 successive US administrations have become increasingly aggressive about secrecy.

The quantity of government documents that are classified has increased exponentially. Paul Feldstein, a former ABC investigative reporter and now professor of history at the university of Maryland told the court that: “over-classification of government records is widely acknowledged as rampant to the point of absurdity. Every government study of the issue over the last six decades has found widespread classification of information that the government had no basis to conceal”.

Nor is the greater proportion of official documents being marked ‘secret’ the only change. Tougher sanctions for at least some government employees who leaked classified documents are also evident post 9/11. More whistleblowers were prosecuted under the Espionage Act during the Obama administrations than under any previous presidency. The current Whitehouse incumbent looks set to trump that record.

Of course such prosecutions are highly selective. The more senior the leaker, it seems, the greater the chance of lenient treatment. “Five years ago the government considered filing Espionage Act charges against General David Petraeus”, Jaffer told the court. “(It had) concluded that he shared classified information, including code words for secret intelligence programs and the identities of covert agents. The government ultimately allowed him to plead guilty to a misdemeanour charge of mishandling sensitive material.”

Not so lucky Chelsea Manning, Reality Winner and a clutch of other relatively junior workers handed long jail sentences for Espionage Act violations. All of these prosecuted whistleblowers, however, were government employees who chose to share restricted material with non-security-cleared outsiders. Pursuing a foreign publisher of leaked information is wholly new territory.

The theoretical possibility of the Espionage Act being used against journalists and publishers is not new – but its deployment for this purpose is unprecedented.

The Espionage Act – a First World War knee-jerk statute – deploys terms that are unusually broad and vague. It provides not only for the prosecution of the unauthorised publishers of classified information, but also all subsequent publishers. Anyone repeating contents from a story in the public domain that is based on classified document could, theoretically, be in the firing line. “It’s a loaded gun pointed at the head of the press” said legal scholars Harold Edgar and Benno Schmidt Jr.

“Various administrations have considered prosecuting journalists under the Espionage Act”, said Trevor Timm, director of the San Francisco-based Freedom Of The Press Foundation. “In each case, prosecutors have accepted that it would be unconstitutional”.

Assange’s case is groundbreaking – it is the first to be pursued this way against a publisher. Most disturbing of all, it would create a precedent that US administrations could deploy against journalists anywhere in the world if their stories relied upon information gleaned from classified documents.

Of course, no one believes that if Assange is successfully prosecuted, the US will initiate actions against every reporter who relies for a story on leaked or classified documents. The US government would have neither the time nor the resources, and anyway frequently leaks material deliberately in pursuit of its own ends.

A legal menace selectively deployed, however, is the more deadly.

Any journalist in receipt of classified information might reflect that, in all probability, they could rely on the leaked material with impunity. But certitude there would be not. Any story that happened to rub up the US administration up the wrong way might provoke an indictment similar to the one currently levelled against Assange.

By then, of course, Assange may well have disappeared into the ‘supermax prison’ ADX Colorado for a term and in conditions that would make a medieval jailer blush. The public might well forget his name – but Assange’s head on a spike will cast a darkening shadow over any reporter offered a classified document. Whistleblowers will be advised to shut up and knuckle down while beneficial sunlight will fall on fewer and fewer of the actions taken in the name of the public.

It is a fate to be feared by any journalist who cares about the trade we ply.