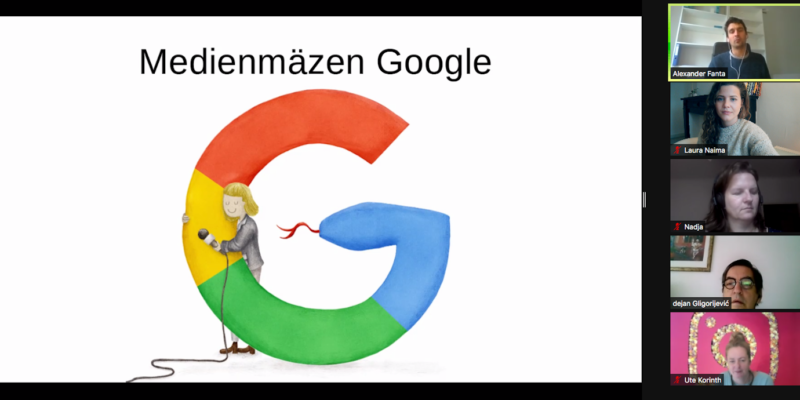 Why does Google invest so much in publishing houses? How does this funding affect media pluralism and editorial independence? How can “new work” create a better atmosphere for workers, particularly during Covid-19? These and other issues were discussed during our latest Digital Expert Group (DEG) meeting on 16 November, which took place online.

In their recently published study “Google, the media patron: How the digital giant ensnares journalism“, journalists  Alexander Fanta and Ingo Dachwitz investigated the motivations behind Google’s huge financial investments and how these may influence the media landscape. They shared their findings based on 25 guided interviews, a data analysis of 645 funded projects and a survey on the use of Google tools among German media houses. Although the study focuses on Germany, their findings are also vital for other countries. The study was funded by the Otto Brenner Stiftung, a German trade union foundation,  in cooperation with the German Trade Union Federation (DGB).

The researchers found that the €200 million cash gifts to European media since 2013 were not distributed evenly: large, established media companies were prioritised. This poses a problem to media pluralism, as the funding helps the already big players get even bigger, while smaller outlets are disadvantaged. “The funding for innovative development creates an unfair market situation, whether this is Google’s intention or not,” Fanta emphasised. Yet, Fanta also expressed hope that the European Democracy Action plan could benefit media pluralism and internet giants will be incorporated in the Media Pluralism Monitor.

“The grants serve to tie media organisations more closely to Google’s product ecosystem. The corporation now plays a significant role in the production, distribution, and monetisation of news, opening up the prospect of Google becoming the dominant “operating system” for digital journalism. Google’s services have long been essential to the digital media. One inter­viewee rightly draws a parallel with the idea of platform capitalism: whoever provides infra­ structure can exert an influence – especially if at some point they should become the sole provider.” This is one of the six hypotheses from the study.

Regarding the qualitative interviews, several journalists were concerned about potential self-censorship amid the increasing cooperation with Google. However, the researchers lamented that self-censorship is difficult to measure: “We cannot count the articles that were never written,” Dachwitz said.

As Google has resisted political efforts in Europe to share advertising revenue with the media, the company’s general investments can be seen as a pay off to its rivals who, simultaneously, are becoming more reliant on Google tools for distribution, content creation and monetisation. Against this backdrop, Fanta posed the question: “Do we want to become dependent on Google when we should investigate them?” Clearly, it is difficult for journalists to turn down money offered by Google that could be used to advance projects which would otherwise not continue.

A lively discussion ensued, where DEG members debated potential alternatives, such as public investments to drive innovation, and what could be done to undermine Google’s influence. Mehmet Koksal from the European Trade Union Institute (ETUI) stressed that it is high time for international tax rules to be adapted in the context of digitalisation. Renate Schroeder, Director of the European Federation of Journalists (EFJ), referred to the recently adopted resolution on authors’ rights, demanding further negotiations between journalists and platforms with the goal of fairer remuneration for journalists and the need for a “digital information levy” to support public interest journalism.

The second part of the meeting was dedicated to the concept of new work in digital media, which was introduced by Ute Korinth: “New work is an umbrella term for working together. It is about leadership at eye level, where everybody’s thoughts count and the work is human-centred.” During the pandemic, where much work is being done from home and online, there are new opportunities to implement new work strategies, as digital platforms such as conference call software or digital workspaces are commonly used. Liberating structures, mindfulness, design thinking methods and failing forward are strategies that form part of new work. The Expert Group agreed to collect digital tools including on mental health issues and use them also for organising purposes.