The Online Seminars on 25 and 26 March are moving closer. We have already updated the agenda and preliminary reading suggestions list. Now we would like to introduce you to our confirmed speakers who will join for the two days of discussions. The seminars will take place on two days: On the first day, Thursday 25 March, experts will be dealing with the question of how to regain trust and improve audience engagements. On the second day, Friday  26 March, panelists will discuss the topic of innovations in the newsrooms, covering how media and AI are converging.

Jonas Jungar is the Head of Journalistic Standards and Ethics at YLE (the Finnish Broadcasting Company). He has been in the news business for 25 years both as a reporter, TV news anchor, EU-correspondent (Brussels) and managing editor. His current position is close to that of a public editor or a journalistic quality controller. Jungar is a former Fellow at the Reuters Institute for the Study of Journalism at Oxford University.

Prof. Dr. Wiebke Loosen is a senior researcher at the Leibniz Institute for Media Research | Hans-Bredow-Institut (HBI) in Hamburg (Germany) as well as a professor at the University of Hamburg. Her major areas of expertise are the transformation of journalism within a changing media environment, theories of journalism, and methodology. Wiebke’s current research focuses on the changing journalism-audience relationship, the datafication of journalism, forms of ‚pioneer journalism’ and the emerging start-up culture in journalism as well as algorithms’ ‘journalism-like’ constructions of public spheres and reality.

Shirish is an award-winning journalist and researcher with 25 years’ experience working in all the UK’s major broadcast newsrooms. More recently he’s worked as a freelance investigative journalist and as a community organiser at the Bureau of Investigative Journalism. He’s spent the last year asking fundamental questions about what and who journalism is for, in order to construct a model of reflective journalism that better represents our communities. He’s now investigating how artificial intelligence, machine learning and modular content might be used to help deliver better journalism at scale.

Maja Sever, journalist and editor at Croatian Radiotelevision (HRT). She began her career in a program for the young, but soon became a war reporter. She has been working in many news productions, probably she’s best known as editor of Hrvatska uživo, afternoon news magazine. She was named Journalist of the Year by the professional association. She believes public broadcasters have a very important role in a post-modern, Internet society. She is president of the Trade Union of Journalists of Croatia, an active member of the Association of Journalists, and member of an expert group for labor rights of the European Federation of Journalists.

Andreas Marckmann Andreassen is Digital Editor and Head of News at Journalisten in Denmark. He recently finished a fellowship on automation in the media, and his book (in Danish) received funding so that it could be mailed to every member of the Danish Union of Journalists. He currently works on an English-language edition, and is a frequent speaker on automation and AI in the media.

Alberto Rabbachin: @rabalb
Alberto Rabbachin is a programme officer at the European Commission Directorate General Communications Networks, Content and Technology. Alberto is involved in designing and implementing the European Commission policy to tackle online disinformation. Prior to joining the Commission, Alberto was a research scientist at the Massachusetts Institute of Technology. 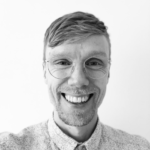 Stephen is the Project Director for the Global Alliance for Media Innovation (GAMI) at the World Association of News Publishers (WAN-IFRA). GAMI is an international network of publishers, media labs, universities and R&D centers that aims to create a healthier ecosystem for innovation in news media by encouraging partnerships and collaborations. Stephen joined the Association in 2008 after working for the Council of Europe in the Media and Information Society Division. Over his years at WAN-IFRA, he has worked in several areas including media development programmes, events management and legal affairs. He is a regular public speaker at international conferences in Asia, Africa, Europe and America and holds a Masters degree in Multimedia Law from the University of Strasbourg.