Coalition published a proposal for an EU anti-SLAPP law 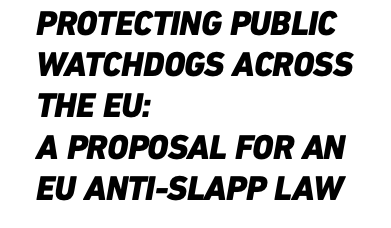 A coalition of about 60 non-governmental organisations from across Europe published on 1 December 2020 a proposal for an EU-anti SLAPP directive. This text is the result of several months of work involving civil society organisations, including the European Federation of Journalists (EFJ) and national journalists’ trade unions, to urge policy makers to protect public watchdogs such as journalists, rights defenders, activists and whistleblowers from Strategic Lawsuits Against Public Participation (SLAPPs).

SLAPP suits are a form of legal harassment. Pursued by law firms on behalf of powerful individuals and organisations who seek to avoid public scrutiny, their aim is to drain the target’s financial and psychological resources and chill critical voices to the detriment of public participation (see policy paper).

Currently, no EU member state has enacted targeted rules that specifically shield against SLAPP suits. EU-wide rules providing for strong and consistent protection against SLAPP suits would mark a crucial step forward towards ending this abusive practice in EU member states and serve as a benchmark for countries in the rest of Europe and beyond. Together with other legislative and non-legislative measures, it would contribute to secure a safer environment for public watchdogs and public participation in the EU.

This is why civil society has engaged a wide range of experts including academics, lawyers, practitioners, SLAPP victims and policy and advocacy specialists, to look into the value added, the feasibility and the key components of possible EU anti-SLAPP legislation. This paper, authored by Liberties’ advocacy expert Linda Ravo, is the result of this collaborative work. The model EU anti-SLAPP legislation proposes a set of rules which, if in place, would make sure that:

As democracy and the rule of law come increasingly under pressure in a number of member states, this paper supports the call on EU policymakers by the undersigned organisations to urgently put forward an EU anti-SLAPP Directive to protect public watchdogs that help hold the powerful to account and keep the democratic debate alive.

This collaborative work received the financial support of the EFJ.