WPFC: EFJ calls for real commitment from European countries signing up to protection for journalists 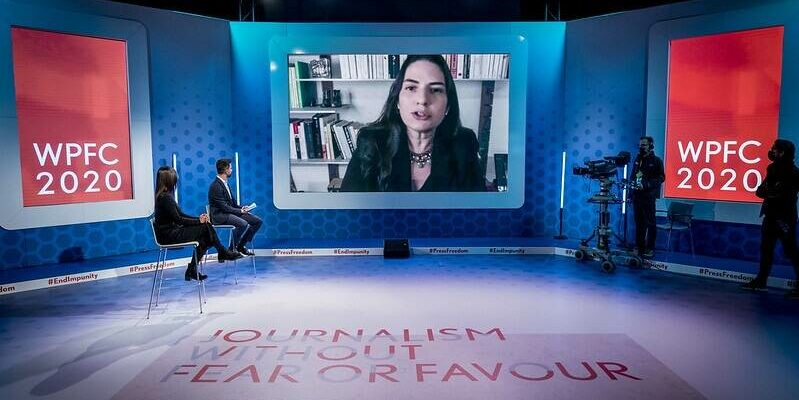 On Wednesday 9 and Thursday 10 December, ministers from close to 60 countries, including 33 European countries (1), are taking part in the Unesco World Press Freedom Conference (WPFC), at the invitation of the Dutch Foreign Minister Stef Blok. This is the first time in the history of the WPFC that a session gathers 56 foreign affairs ministers from around the world. On Wednesday they discussed topics like how to tackle violence against journalists, photographers and media workers more effectively. All participating countries will confirm the agreements they reach in a final declaration, The Hague Commitment to increase the Safety of Journalists. The European Federation of Journalists (EFJ) calls on these countries to be consistent and to put their commitment into practice. Many of the signatory countries are not taking the necessary measures to better protect journalists.

According to Dutch Foreign Minister Blok, “Journalists around the world need to be better protected so that they can fulfil their role as watchdogs of democracy. Countries that have already made pledges but still violate press freedom must be held to account. We already have all the tools and standards we need. Now it’s time for action. That’s what all countries taking part will forcefully advocate.”

Among the 33 European signatories of this new agreement are countries such as France, Malta, Northern Macedonia, Georgia, Croatia, Austria and Ireland, which have not responded to any of the press freedom violations denounced this year on the Council of Europe Platform for the Protection of Journalism. Or countries with a very low response rate, such as the United Kingdom, Bulgaria, Estonia and Armenia.

“We are shocked to see France sign this international commitment at a time when it is in the process of adopting one of the most restrictive laws on the European continent, the Global Security Law, which will allow the arrest of any journalist filming or photographing police officers in action,” said EFJ General Secretary Ricardo Gutiérrez. “This is a great hypocrisy. If the French authorities claim that they want to improve the safety of journalists, then they must immediately renounce this law.”

The EFJ also calls on the 33 European signatory states to implement without delay the protective measures they committed to take in 2016 by signing the Council of Europe Recommendation on the Protection of Journalism. “Only a few States, such as the Netherlands, Sweden or Italy have taken concrete measures suggested by the CoE Recommendation. Most of the other States have done nothing,” insists Ricardo Gutiérrez.