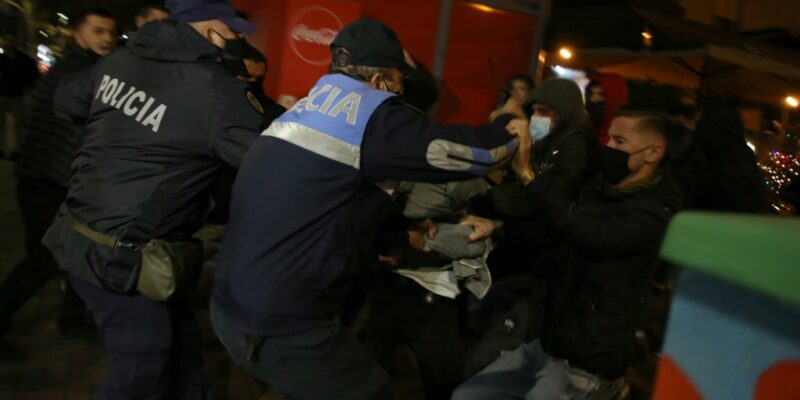 The protests erupted after Klodian Rasha, a 25 years-old Albanian citizen, was killed by a police officer on 8 December. He had been out after curfew and ran away from the police. Rasha was shot twice in the back and the officer alleged he had carried a firearm, which Rasha’s family denied. Subsequently, the police officer was arrested and accused of homicide. The ongoing protesters call for Interior Minister Sander Lleshaj and Prime Minister Edi Rama to resign.

On 11 December, RTV Ora News’ reporter, Xhoi Malësia, was beaten and taken to the police station after filming the police repression during the protest. On the same day, the editor in chief of the newspaper ‘Koha Jonë’, Qamil Xhani, was detained by the police and hit on the head and in the back. Both incidents occurred in Tirana, the capital of Albania.

The journalists have denounced the conditions of their detention, which lasted a few hours. Malësia was not allowed to make a phone call while the police seized Xhani’s phone and deleted footage on his camera.

Both were also forced to sign a paper acknowledging their participation in an illegal gathering as a condition for their release.

The day after, a local journalist from ‘Syri TV’, Aldo Mustafa, became a victim of police violence while reporting on the protests in Durrës, a city located in western Albania. Later that day, the video editor of “DurrësLajm” news agency, Shefqet Duka, was also detained while he was walking back home. They were both released hours after their arrest.

These are not isolated cases of police violence against media workers in Albania, where journalists are often detained by the police, even when they are identified as media workers.

APJA, alongside the League of Journalists of Albania, said: “We call on the Prime Minister Edi Rama and the general director of the state police Ardi Veliu, to speak publicly against the violence and obstruction of journalists and the media in general to do their job during the protests in Tirana and in the other cities; to encourage the identification of those responsible for those acts of violence against media workers. In this case, your silence is an encouragement of the unworthy conduct of the police in open violation of the freedom of media to perform their duty in a democratic state.”

IFJ General Secretary, Anthony Bellanger, said: “These repetitive acts of violence and intimidation of Albanian police against journalists are unacceptable in a democracy. The government must investigate these attacks and hold the perpetrators accountable.”

EFJ General Secretary, Ricardo Gutiérrez, said: “As OSCE Chairperson-in-Office, Edi Rama should apply to the letter the principles for the protection of journalists promoted by the Organisation for Security and Co-operation in Europe. We call on the Albanian authorities to stop the illegitimate use of violence by the police and to negotiate a national plan for the protection of journalists with journalists’ representative organisations.”