EFJ and IFJ welcome decision not to extradite Julian Assange 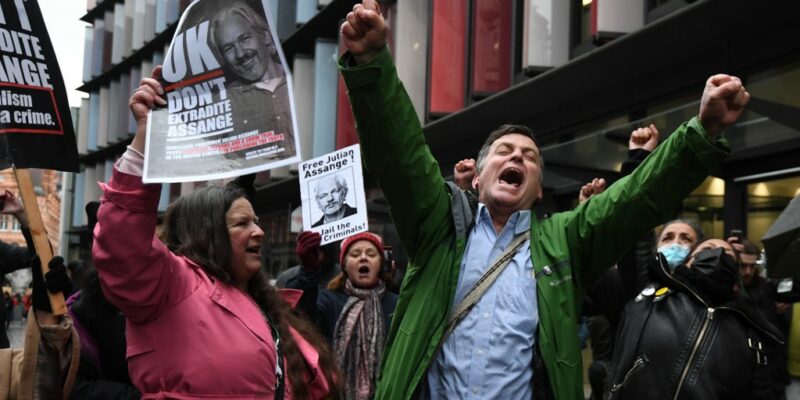 Judge Vanessa Baraitser today ruled against Wikileaks founder Julian Assange‘s extradition to the United States arguing it would be “oppressive by reason of Assange’s mental health”. The International Federation of Journalists (IFJ) and its UK and Australian affiliates, the NUJ and the MEAA, and the European Federation of Journalists (EFJ) welcome the decision and are urging the authorities to immediately release Julian Assange.

The judge argued Assange suffers from depression and that there is a high risk of suicide. If extradited, she considered it likely the US would send him to prison under special administrative measures (SAMs) and wouldn’t prevent Assange from committing suicide. Therefore, she considered his extradition “unfair”.

“Faced with the conditions of near total isolation without the protective factors which limited his risk at HMP Belmarsh, I am satisfied the procedures described by the US will not prevent Mr Assange from finding a way to commit suicide and for this reason I have decided extradition would be oppressive by reason of mental harm and I order his discharge”, judge Baraitser said.

The American government has now 15 days to appeal the decision.

“The IFJ welcomes the judge’s decision not to extradite Assange because of the risk the extradition would pose to his health and well-being. However we are disappointed that the judge appears not to adequately address the threat to media freedom his extradition would have posed in today’s ruling. For years the IFJ and all its affiliates, particularly in the UK, Australia and the USA, have been reminding people that the detention of Julian Assange is contrary to international law and the United Nations Universal Declaration of Human Rights. Furthermore, Julian Assange’s health has deteriorated dramatically since his imprisonment in April 2019 and the Covid-19 virus in his prison poses a serious threat to the survival of our colleague, holder of the IFJ International Press Card. It is time for the US to drop its attempts to extradite him”, said IFJ General Secretary, Anthony Bellanger.

“The judicial harassment of Julian Assange must be brought to an end. US and British politicians are abusing the US Espionage Act to criminalise Assange’s revelations of US war crimes in Iraq and Afghanistan. This abuse of the law threatens press freedom and the right of citizens to access information. We welcome the decision of the British judiciary, which demonstrates its independence from the political authorities and their attempt to criminalise whistleblowers,” added EFJ General Secretary Ricardo Gutiérrez.

A long fight against Assange’s extradition

The 49-year-old, father of two, sought refuge at the Ecuadorian embassy in London for seven years has already spent 16 months at Belmarsh top security jail.

He has been indicted in the United States under the Espionage Act for WikiLeaks’ 2010-11 publications of the Iraq War Logs, the Afghan War Diaries, and State Department cables.

If convicted, Assange would face 175 years in prison. He is accused by the Americans of encouraging whistleblower Chelsea Manning in 2010 to break into the government’s computer system to provide information containing clear evidence of war crimes, including the publication of the video Collateral murders. The video showed, via an onboard camera on a US Apache helicopter in Iraq, the deliberate shooting on 12 July 2007 in Baghdad of civilians by the US military. At least 18 people were killed in the incident, including two journalists from the Reuters agency.

Both the IFJ and its British and Australian affiliates, the NUJ and the MEAA, have repeatedly highlighted the risks to journalism posed by Assange’s threatened extradition. Today’s ruling avoids a terrible precedent for the potential prosecution of any journalist who published material in similar circumstances.

The IFJ raised Assange’s case at the United Nations and joined over 40 press freedom, human rights and privacy groups to call on the UK government to release Mr. Assange without further delay and block his extradition to the US.