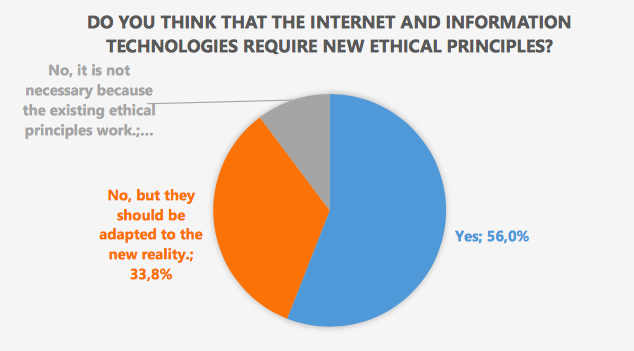 
The Blanquerna School of Communication and International Relations and the four journalism schools in French-speaking Belgium today released two reports looking at journalists’ and journalism students’ perceptions of self-regulation bodies, ethical standards and challenges they face in the digital age. The findings show that more dialogue and awareness is needed to apprehend ethics in today’s journalism.

The Blanquerna School of Communication and International Relations collected data on the perception of media councils by working journalists and how they adapt themselves to the challenges in the digital age. More than 400 working journalists from Austria, Belgium, Estonia, Finland, Hungary, Ireland, Italy, Poland and Spain were surveyed along with 61 board members of media councils in the same nine countries. A data visualisation tool was developed as well as a report.

Questioned on the relevance of codes of ethics with regard to digitalisation, members of media councils mostly considered that existing national codes already respond to the new reality (70.7%), while only 33.18% of the journalists shared this view.

Journalists and members of the media councils responded in similar ways to questions regarding day-to-day practices, for example regarding the journalists’ responsibility when using external content in news stories, where both sides agreed that accuracy, quality and legality of linked content must be guaranteed. The report suggests that dialogue between the different stakeholders involved should be encouraged.

In parallel, the ULB, along with UCLouvain, ULiege and IHECS, ran a qualitative research study on journalism students’ perceptions of journalism ethics. This study was based on focus groups with 33 students from the main journalism schools in French-Speaking Belgium who had recently done an internship in a newsroom.

The objective of this research was to analyse how journalism interns are confronted with ethics, how they apprehend these issues and deal with them, how they deviate from or adjust to those common standards. The study also analysed students’ opinions regarding how adequate they think professional norms are in connection to current developments in journalism: digitalisation, economic crisis and blurring professional identities.

In particular, it was found that young journalists do struggle with new ethical obstacles that they believe previous generations did not have to face, especially because of social media. Some participants therefore viewed codes of ethics as ill-suited to the current context. The study is also available in French.

This Academic Research programme is aimed to support the work of media councils in adapting to the digital age. It was produced in the framework of the pilot project “Media Councils in the Digital Age”, funded by the European Commission (DG CONNECT) and led by a European consortium bringing together several European press councils (Austria (OP), Germany (TDP), Ireland (PCI), Belgium (RVDJ and CDJ), Finland (JSN)), two universities (ULB in Belgium and Ramon LLull-Blanquerna in Spain) and the European Federation of Journalists (EFJ). The involved press councils are part of the Alliance of Independent Press Councils of Europe (AIPCE).