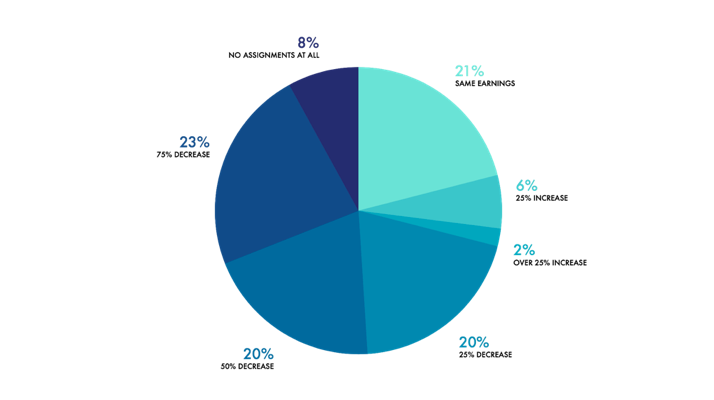 Results from DJV Survey on impact of the pandemic on Freelancers


The German Journalists Association (DJV) has conducted a survey on the economic impact of the Covid-19 pandemic on Freelance journalists in Germany. About one year after the beginning of the crisis, the results show that many freelance journalists face an increasingly precarious situationl due to insufficient support. The European Federation of Journalists (EFJ) joins its German affiliates in drawing attention to this particularly vulnerable group of journalists and in calling for improved financial mechanisms to address this issue.

Between 29 January and 19 February 2021, 1,090 freelance journalists participated in the study. It found that the average annual income of freelancers decreased by 25% to 25,500 euros in 2020. More than two thirds of freelancers reported a decline in work assignments, half of them recorded losses of more than 50%. One in ten no longer received any assignments at all.

The survey found that Freelancers reporting on events or personal stories, including freelance photo journalists, were hit particularly hard. Moreover, almost every fifth person had to liquidate their pension assets and merely 25% received financial support or social benefits from the state.

Frank Überall, the DJV’s national chairman, strongly lamented these findings: “Right now, one of the main pillars of journalism in Germany is breaking away. Without freelance journalists, not a single medium would be publishing or broadcasting anymore. The national government must finally wake up and save Freelancers from ruin.”

“Freelance journalists throughout Europe lose work, receive lower fees and many eventually leave the profession. This brain-drain has an unprecedented impact on journalistic work and the people’s right to know, in particular at local level, said Renate Schroeder, EFJ Director consulting the EFJ’s Freelance Expert Group.

The EFJ has published an overview on government support to media and journalism including freelance journalists.