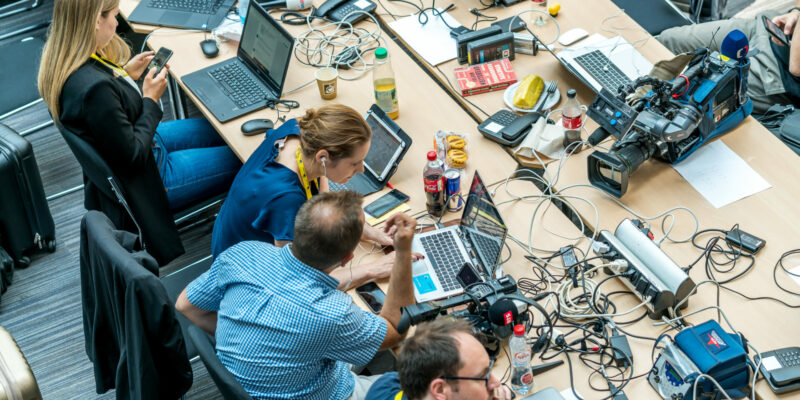 The COVID-19 pandemic has shown that journalists and reliable news information are more necessary than ever. It has also tested the weaknesses and limitations of most of the European media business models. The awareness at the European level is growing: “the health of the news media sector is directly related to the health of our democracies. And the diagnosis is unfortunately worrying,” said EU Commissioner for Democracy and Transparency Vera Jourova in her video address.

The European Union is investing much more in media and journalism now through Creative Europe, Horizon Europe and Digital Europe programmes and aims to strengthen media freedom as part of its European Democracy Action Plan. “For the first time, we address both the democratic and economic dimensions,” Jourova added. What is at stake is nothing less than jobs, the quality of information, but also media pluralism and independence, currently under threat in a number of EU countries.

What is a healthy media sector?

According to the speakers, a healthy media sector means fair remuneration for journalists and publishers, new business models that would ensure a high level of trust from the citizens and equivalent media coverage in urban and rural areas. “We need to support local journalism, the issue of news deserts is all over Europe and dangerous for our democracies,” said EFJ President Mogens Blicher Bjerregard.

Media start ups and labs (or incubators) mushroom in all EU countries and provide much needed spaces to help media companies and professionals to be more innovative. The examples of MediaLab Bayern and VRT Sandbox illustrated the need to collaborate further with the different media stakeholders and to convince that technology can concretely help journalism. The assumption that tech is a danger to journalists is no longer relevant for Agnes Stenbom, from Norwegian-based media group Schibsted: “We need to help journalists and not replace them,” she said.

‘It is all about the team’

Collaboration was highlighted by the speakers as key to foster innovation in media companies. In particular, innovation means bringing a diversity of complementary profiles in the newsrooms. “Journalists do not have to code, but we need people who can. We need to recruit new people with new competences, it’s all about the team,” said Andreas Marckmann, digital editor and Head of News at the Danish union magazine Journalisten, emphasising that a mutual understanding of ethics is essential here.

Working in a team with colleagues based in different European countries is precisely the concept of the Stars4Media exchange and training programme, officially launched at this occasion. Stars4Media aims to make the media sector more sustainable by building new partnerships between media organisations across Europe. The EU-funded programme is supported by the European Federation of Journalists (EFJ), the World Association of News Publishers (WAN-IFRA), VUB University and Europe’s Media Lab. More information about Stars4Media and how to apply here.