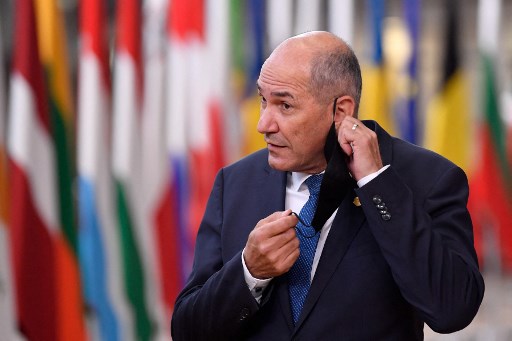 The European Federation of Journalists (EFJ) today joined five leading media freedom organisations in writing to the President of the European Commission to express shared and growing concerns over the situation for press freedom in Slovenia.

The undersigned press freedom and journalists’ organisations from across Europe are writing to express our sincere concern about the deteriorating situation for media freedom in Slovenia and the renewed attacks by the Prime Minister on the independence of the Slovenian Press Agency (STA).

We believe the repeated denigration of journalists, combined with the ruling party’s attempts to exert greater control over the country’s public service media, are creating an increasing hostile climate for critical reporting which serves its fundamental role of holding the government to account.

Since returning to power in early 2020, we have monitored closely as Prime Minister Janša has increasingly employed Trumpian style tactics of attacking journalists on Twitter and dismissing critical reporting as “fake news”.

Such comments by Janša and other figures within the Slovenian Democratic Party (SDS) have sought to divide the media down ideological lines, stigmatising liberal and mainstream outlets as “liars”, “manipulators” and organs of disinformation.

These attacks go well beyond mere rhetoric, however. The latest suspension of financing of the Slovenian Press Agency (STA) appears to be yet another attempt by the administration to starve the agency of resources, undermine its sustainable funding model, and undercut public trust in its journalism.

This is the second time in just three months that the agency’s financing has been withheld by the Government Communication Office (UKOM). As has been pointed out, funding was already approved in the state budget for the STA business plan for 2021, regardless of whether a contract has been completed or not. There is a clear legal basis for the funding to continue.

Ultimately, our organisations maintain that beneath this contractual dispute, UKOM’s actions are indicative of broader efforts by the SDS to subdue the agency’s reporting and change both its director and editorial policy to one more favourable to its political agenda.

These concerns were compounded last week when the Prime Minister called for STA director Bojan Veselinovič to step down and be held accountable for “illegal actions”. We strongly condemn this breach of executive power and believe it provides the clearest example yet of the SDS leadership’s direct hostility towards the agency.

Moreover, the use of the government Twitter account to amplify these comments and accuse Veselinovič of spreading “fake news” is another worrying example of the misuse of state communication channels by the ruling party to attack the media.

This meddling in the institutional independence of the STA has gone on long enough. As it did previously, the Commission should engage the Slovenian authorities to ensure that the funding is resumed and demand that these attacks on its independence are halted. If it does not, a vital part of the country’s media ecosystem could be sacrificed for short-term political gains of the ruling party.

In the background meanwhile, proposed legislative changes that would defund the public broadcaster RTVSLO remain in the consultative phase. These proposals were initially allotted a mere five working days for public submissions – a brazen and unsuccessful attempt to rush these changes past NGOs and through parliament. We remain opposed to these amendments, which are part of a wider political agenda.

Despite recent developments, it must be stressed that freedom of expression and media pluralism remain intact in Slovenia. According to the Media Pluralism Monitor of 2020, the indicator on political independence of the media scored the highest risk of all indicators with 91 percent.

There is a long way to go until the country can be considered in the same realm as Hungary or Poland in terms of press freedom. But as was rightly highlighted during a recent plenary session at the European Parliament, the tell-tale warning signs are clear and fit a worrying pattern observed elsewhere.

The climate for critical journalism is worsening, public service media are coming under sustained political and institutional pressure by SDS leadership, and the use of state bodies to broaden the attack on unfavoured media is gradually increasing.

Underpinning these issues is the same mentality which drives attacks on the press in Hungary and Poland: that critical media are an enemy or a force of “opposition” to be attacked, rather than a necessary element of a functioning democratic system.

The prospect of having the Prime Minister use the pulpit of the European Council rotating presidency to attack journalists in such a way at the European level is deeply troubling and could have a normalising effect on this kind of behaviour in the future.

In the coming months, the Commission must ensure it closely follows developments in Slovenia and responds publicly to future attacks on the media by the Prime Minister. It must be stated clearly that such divisive rhetoric has no place in the European Union. It is vital for press freedom and democracy in the EU that Slovenia does not follow further down the illiberal path forged by Hungary and Poland.