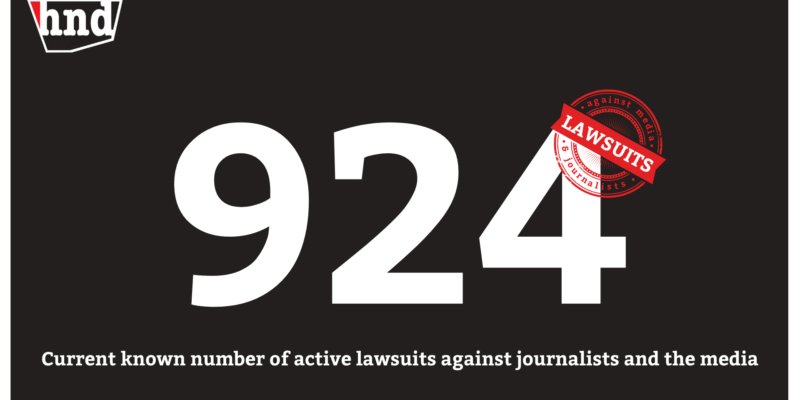 New survey carried out by the Croatian journalists’ association (HND) shows an increase in lawsuits targeting journalists and media outlets in Croatia compared to last year.

According to HND survey, at least 924 lawsuits were initiated against journalists and media outlets in Croatia, in which plaintiffs are claiming almost 10.5 million euros.

Among them, 892 are civil lawsuits for alleged violations of honour and reputation against publishers, editors and journalists for publishing texts and articles. The other 32 are criminal lawsuits. Plaintiffs are individuals, public and political figures, as well as legal entities, politicians in power and judges. The Hanza Media group (Jutarnji List) has the highest number of lawsuits, with 479 legal cases. The Styria group (Vecernji list) follows with 203 lawsuits.

Data from previous years show that one in ten journalists was eventually convicted. In 2020, there were 905 active court cases against journalists and media outlets.

“The number of 924 lawsuits against journalists and the media shows that the judicial persecution of the media and journalists in Croatia is still ongoing and that there is no end in sight. It is important to note that the actual number is probably higher because we received the data from 23 media outlets only”, said Hrvoje Zovko, president of the Croatian Journalists’ Association.

“We want to warn the domestic and international public, loud and clear, that lawsuits are the most common means of intimidating journalists and the media in order to give up serious investigative stories,” he added.

The Croatian Journalists’ Association has itself three active lawsuits in a unique case involving the national public service broadcaster HRT against its own employees, HND and HND president.

“The number of court proceedings against media professionals in Croatia is absolutely insane. We know very well that these methods are designed to silence, intimidate and drain the financial resources of media outlets and journalists, not to win the cases. The fact that the problem is getting worse, not only in Croatia but also in the rest of the European Union, confirms that we need to find a Europe-wide response quickly,” reacted the General Secretary of the European Federation of Journalists (EFJ), Ricardo Gutiérrez.

The EFJ has joined the Coalition Against SLAPPs in Europe (CASE) to end the practice of abusive lawsuits (also known as SLAPPs – Strategic Lawsuits Against Public Participation) against journalists and human rights defenders. Together with media freedom and environmental organisations, such as Reporters Without Borders, Committee to Project Journalists, Greenpeace, Transparency International, the EFJ urged the European Commission to put forward an “Anti-SLAPP” directive.

Anti-SLAPP laws already exist in a number of states in Northern America and Australia, but no EU country has such legislation in place so far.