EFJ joined the CASE coalition against abusive lawsuits in Europe 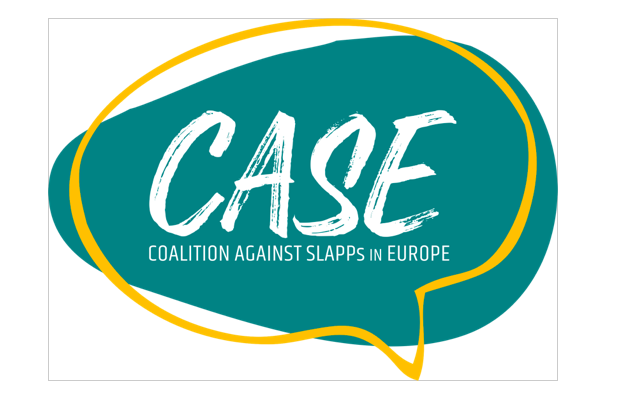 The European Federation of Journalists (EFJ) joined the Coalition Against SLAPPs in Europe (CASE) to end the practice of abusive lawsuits against journalists and human rights defenders. The  CASE website was officially launched on Friday 26 March 2021 in an event hosted by Greenpeace EU.

Thirty media freedom and environmental organisations across Europe, including the EFJ, Reporters Without Borders, Committee to Project Journalists, Greenpeace, Transparency International, have united to work to expose legal harassment, protect SLAPP victims and advocate for comprehensive protective measures and reform at the European level.

Generally pursued by wealthy and powerful litigants, SLAPPs (Strategic Lawsuits Against Public Participation) are an abuse of the legal system to intimidate and silence public watchdogs through lengthy and expensive litigation. Journalists and media outlets are typical targets of these vexatious procedures. According to platforms monitoring media freedom violations in Europe, 2020 saw a significative increase of SLAPP-related cases. For instance in Croatia, journalists’ organisations TUCJ and CJA counted last year over 905 pending lawsuits against 18 media outlets and journalists with plaintiffs claiming almost HRK 68 million (9 million euros) in total. Recently in Poland, a new civil defamation lawsuit filed by the Justice Minister against daily Gazeta Wyborcza brought the number of cases against the newspaper in just a couple of years to 60.

The CASE website presented on Friday is built around three pillars – expose, help and advocate. It brings together initiatives and resources to better understand the phenomenon as well as to support those targeted by legal intimidation with legal expertise and assistance.

With regard to advocacy, the coalition presented in December 2020 a proposal for an anti-SLAPP legislation. The text contains a set of rules to protect public watchdogs from SLAPPs, on which the European Union could base its future proposal.

The European Commission already announced its intention to put forward an “initiative” by the end of the year 2021, but has not said what form it will take. Invited to the website launch, EU Commissioner for Values and Transparency Vera Jourova reaffirmed the importance and urgency of the issue:

“I promised many time that we will do something against SLAPPs, which are complicating the work of journalists and human rights defenders. I want to deliver on this promise by the end of the year and my preference would be to introduce a legally binding legislation”.

Anti-SLAPP laws already exist in a number of states in Northern America or Australia for instance, but no EU country has such legislation in place so far.